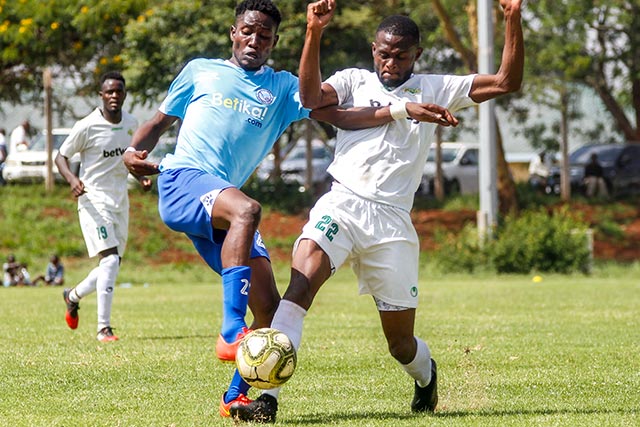 Sofapaka were the brighter side in the opening stages of the match. Barely two minutes into the encounter, youngsters Brandon Obiero and Jacob Onyango combined well at Sharks penalty area but custodian Brandon Obiero reacted on time to punch out Onyango’s delivery.

At the tenth minute, the host came close to net the opener through Eric Mata. The striker picked up a loose ball by keeper Fredrick Odhiambo but Daniel Guya was well placed heading Mata’s attempt back to play.

Two minutes past the quarter-hour mark, center back Boniface Onyango gave Kariobangi Sharks the lead from the spot after a foul play by Brandon Otieno.

At the half hour mark, Ojunga Geoffrey laid through a low delivery to Jacob Onyango, the forward dribbled past Boniface Onyango but his effort went straight into Obiero’s arm.

At the hour mark David Otieno delivered in a dangerous ball into penalty area, Guya connected but his header narrowly missed the target.

Eight minutes on,Lawrence Juma set a short ball to Geoffrey Ojunga but the midfielder’s shot hit Masaba back to play.