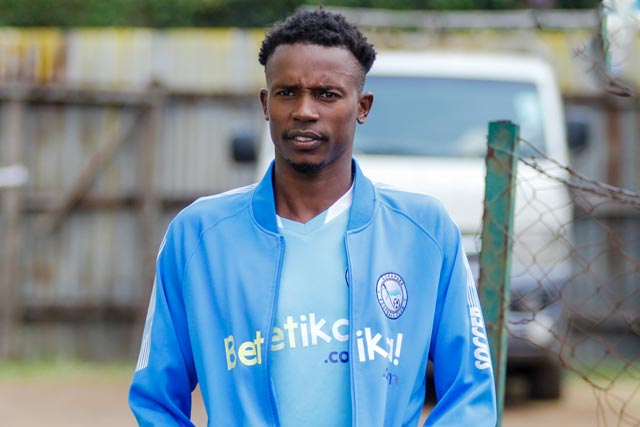 David Kingatua has weighed in on the teams’ current situation ahead of Sunday’s big clash against Kakamega Homeboyz.

The midfielder talks about facing Homeboyz, the unfamiliar position and injury struggles.

Kingatua welcomes Talanta’s draw as a building point into Sunday’s encounter, saying, “There was too much positivity to pick from last weekend. When you want to go way up, you have to start from a point, and that’s precisely what we are doing now. We want to go for maximum points beginning Sunday. We’ve been focusing on our weaknesses and main flaws, primarily in the final third, and I’m confident we’ll capitalize on our opportunities to put us in prime position to win our upcoming games.

The midfielder says the team is in an unfamiliar position but is hopeful for a positive turn around. “We are in a very unfamiliar position in the league standings despite having been pushing and working on improving our results.” We have individual and team targets for the season. Currently, our attention is fully on the general team performance and target at the end of the season.

Despite the poor run since the year began, Kingatua believes the team has enough experienced players to pull off the results as the season enters the home stretch. At every work station, you will always experience pressure to deliver the needed results. We are in that situation now, though there is no need to panic because some of us have been there before and, going by the pull of experienced players at the club, we only need to focus, believe in ourselves and take advantage of the full points at our disposal, and I am confident we will have the work perfectly done by the end of the season.

The former Harambee star, who hasn’t had much playing time due to injuries, concludes by saying he feels fully fit and ready to pay back the trust bestowed on him. “I haven’t been at my best this season being on and off the pitch due to a number of injuries which have really hindered my progress. Nevertheless, I am fully fit and feel confident to repay the trust and patience the team has shown me. ”