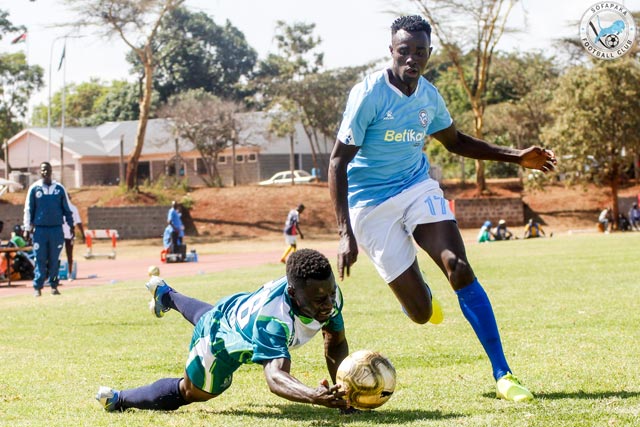 KCB and Sofapaka played out to a barren draw in a tightly contested tie at Kasarani Annex.

The hosts kicked-off proceedings at a higher tempo in a search for an early opener, though it was Sofapaka who came close to netting the opener ten minutes into the match through Dan Guya. The defender made a quick run into the KCB defense, heading Geoffrey Ojunga’s delivery, but his attempt went into keeper Gabriel Andika’s arm.

Two minutes past the quarter-hour mark, the Bankers had a perfect opportunity to take the lead through Hillary Wandera, but Kevin Omondi was well placed to finger tip out the defenders’ goal-bound attempt.

Right at the stroke of the half-hour mark, Sofapaka had another chance at goal. Titus Achesa , Joe Waithera and Ambrose Sifuna combined well on the left flank, but Sifuna’s final attempt missed the target, going wide.

At the hour mark, Ambrose Sifuna came close yet again to breaking the deadlock after being set through by Lawrence Juma, but the youngster’s effort went right into Andika’s arms.

Ten minutes from time, the hosts had a perfect chance on goal through Derrick Otanga but David Nshimirimana cleared the striker’s effort off the line.

Against the run of play, substitute Robert Ponda collected Ambrose Sifuna and dribbled past Hillary Wandera but the forward’s effort hit the side netting as the two teams settled for a point each.