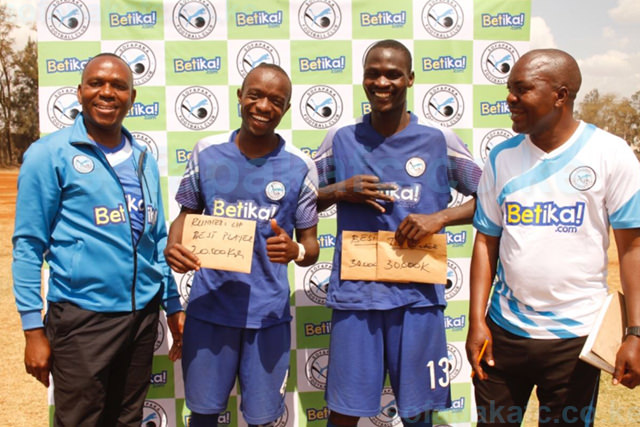 Ugandan talismanic striker Umaru Kasumba has for the second time running won the top scorer and best performing award for Kenyan Premier League (KPL) side Sofapaka in the month of September, 2017.

Kasumba’s unique elegance saw him score five out of seven goals scored by Sofapaka in the month alone which came with a Sh 30,000 award.

Kasumba went further to be declared the player of the month and received a similar award during a short ceremony held at the team’s training ground at Eastleigh High School yesterday.

Mohammed Kilume tied up with Modest Aloro for the best player runner-up accolades although it was the former who scooped Sh 20,000 that was at stake following evaluation during matches against Chemelil Sugar, Ulinzi Stars, Kariobangi Sharks, Kakamega Homeboyz and Gor Mahia.

Kilume received the best player’s runner-up prize on the strength of being relatively younger than Aloro ostensibly to give him motivation, besides the fact that the latter had won the same award during its inauguration, hence the need to give it to someone else as a sign of goodwill.

“At Sofapaka, we are like a family bound by love where everyone is one’s keeper. Kilume is younger as compared to Aloro who won the last edition and it was only fair that he be given the honors to boost his confidence. There are absolutely no hard feelings in this development,” said Sofapaka coach Sam Ssimbwa while giving out the awards.

On the same note, the Ugandan tactician who is a strict disciplinarian and an advocate of perfection underscored the need of the rest of Sofapaka players working hard to bag the awards which are in the second edition.

“Players have to be dedicated and above all show me that they have what it takes to play for a team of Sofapaka’s calibre since this is the only avenue to the awards. Such attributes require hard work and this is what I have been trying to instil in the team all along,” said Ssimbwa .

Ssimbwa gave plaudits to Kasumba and Kilume, saying they should serve as role models to their collagues who aspire to win the awards in future.

Upon being declared the top marksman and player for the second time on a trot, Kasumba who has been eyeing an iconic status in the KPL attributed the feat to hard work.

“Were it not for hard work and discipline, I don’t think I would have made it.  I want to assure you that I’m not done yet in scoring at the Kenyan league and my target is to bag the Golden Boot Award,” said Kasumba who has 11 goals to his name since joining Batoto Ba Mungu.

Awards at a glance-