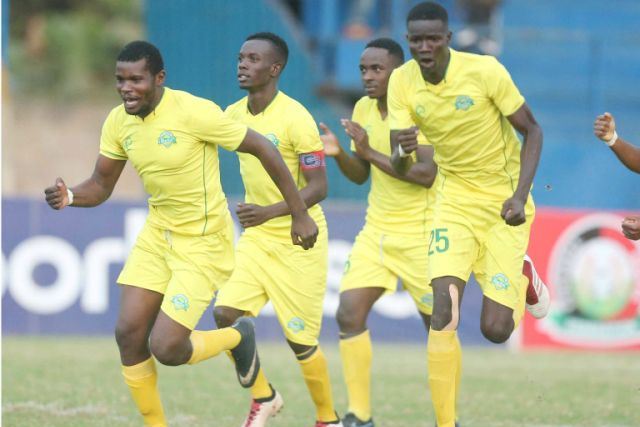 Kariobangi Sharks edgeS out Sofapaka 3-2 in a dramatic Football Kenya Federation (FKF) Shield final at the Moi Sports Centre Kasarani on Saturday evening, for their first ever major accolade.

The match made for a dramatic end with two goals and a missed penalty all in the span of eight minutes. Sharks were trailing 2-1 having lost a one goal lead before Sidney Lokale equalized in the 82nd minute and George Abege scoring the third three minutes later.

But, immediately after Sharks had gone 3-2 up, Sofapaka were given a penalty after Kevin Kimani was brought down in the box by Eric Juma, but the midfielder skied his effort with Shrks breathing huge sighs of relief to hold on to the lead and claim the title.

They had gone 1-0 up through Abege before Stephen Waruru equalized and Kevin Kimani’s early second half goal giving Batoto ba Mungu the lead.

Both chasing a piece of the history cake, the match was all set to be a cracker, Sharks looking for their first ever major title while Sofapaka’s head coach John Baraza was looking to be among the few men to win the title both as player and coach with the same team.

It was Sharks though who started the match with more urgency upfront and as early as the fourth minute, they were already causing ripples in the Sofapaka backline.

Lack of communication at the back saw keeper Wycliffe Kasaya go off his line to try cut out a dipped ball, but Harrison Mwendwa beat him to it though his final shot came off the side netting with the goalmouth staring at him.

Two minutes on the other end, Waruru had an effort with a header from the near post off a Kevin Kimani corner, but he couldn’t direct it on target, the ball going wide.

In the 20th minute, Sharks were almost punished for some dangerous play when Pascal Ogweno lost the ball cheaply under pressure from Umaru Kassumba, but the Ugandan’s attempt to cut back a cross was futile, the ball being cleared away.

Sharks all this time had more of the possession with their ball-playing men doing well to keep the ball and try open up the Sofapaka backline marshaled by Willis Ouma and Burundian international Moussa Omar.

In the 25th minute, Duke Abuya sent in an inviting dipped cross to Henry Juma on the right, but the winger’s attempt on the volley was wild, skying over the bar.

But the goal they had yearned for came through in the 29th minute when Abege beat the offside trap to a Patillah Omotto pass before shooting low past Wycliffe Kasaya.

It was a goal they had worked hard for and one that injected some bit of confidence especially on the ball. They kept pressing but this time, Sofapaka too had some urgency to score.

They were lucky to escape in the 40th minute when Mwendwa did well on the right to find some space and slash in a low cross, but Juma at the edge of the box skied over.

For that missed chance, they paid heavily a minute to the break when Waruru, not the tallest of players inside the box brushed in a header at the near post when he rushed to meet a well curved freekick from Kimani.

In the second half Sofapaka started by making attacking changes, Ezekiel Okare coming on for Kepha Aswani. They were clearly coming into the final half on the front foot and they were awarded on the hour mark when Kimani headed them ahead.

Kasumba did well with some exquisite piece of skill on the right to get away from his markers and lay in a cross which was met by the pint-sized midfielder at the backpost, heading it in from a tight angle.

Three minutes later, Kasumba had a chance to get a goal for himself when he was flicked on by Okare, but his volley on the first time of asking went over.

Sharks made changes with Sidney Lokale coming on for Juma while Shaphan Oyugi was rested for Vincent Wasambo. Baraza made another change bringing on Teddy Osok for Elli Asieche in midfield as he sought to have more solidity.

In the 70th minute, substitute Lokale had a brilliant opportunity to take Sharks back into the game off a swiftly executed counter but his eventual shot from inside the box went wide.