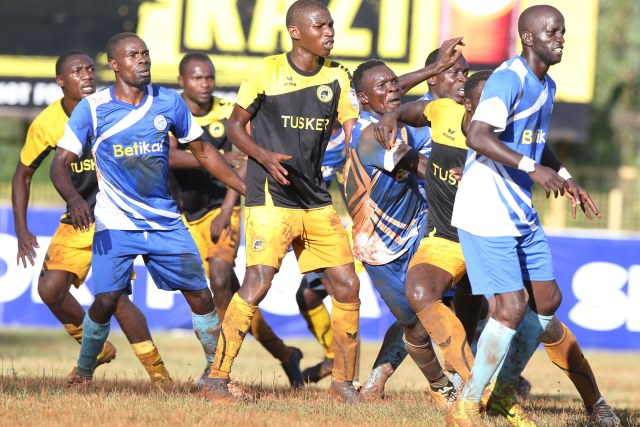 Sofapaka are still on cloud nine after inflicting Tusker a second defeat on a trot and as a result increased their chances of taking the runner-up position in the Kenyan Premier League (KPL).

Batoto Ba Mungu’s 1-0 win over Tusker at a muddy Ruaraka ground on Saturday is still the talk amongst football lovers who attended the match especially after the brewers had fallen by a similar margin to Thika United at the same venue a week earlier.

Most of these fans are of the opinion that had Sofapaka produced such kind of scintillating performance right from the onset of the league, it would have been a different story altogether in as far as the KPL title chase which has since been won by Gor Mahia is concerned.

Following their weekend success, Sofapaka shot up from the fourth to the second position with 52 points and will need an outright win over Zoo Kericho in their final match next weekend to be declared the undisputed KPL 2017 runners-up elect.

Yesterday, Sofapaka deputy coach John Baraza who has suddenly risen to an unsung hero status after propelling the team to the weekend’s conquest of Tusker gave plaudits to his players for a job well done.

“When you see a player like Okoti (Humphrey) scoring after recuperating from an injury then you know things are okay. There are more reasons to thank the team since most of the players who did duty against Tusker usually grace the bench,” said Baraza who has been holding brief in the absence of Head Coach Sam Ssimbwa.

Sofapaka had been hit by a plague of injuries on key players like Ali Feni, Jonathan Mugubi, Hillary Echesa and Bernard Mang’oli, forcing Baraza to gamble with the likes of Okoti, Samuel Muturia and Edmond Kwanya during the Tusker game and they did not disappoint.

Okoti even had the audacity of returning the faith bestowed on him by Baraza after rifling in a free-kick for Sofapaka’s winning goal before disbelieving Tusker fans.

What’s more, Sofapaka celebrated the return of scoring machine Umaru Kasumba who has just recovered from a nagging injury.

And, just like the rest of the first eleven players, Baraza had words of praise for the talismanic Ugandan striker despite failure to add on his 11-goal tally thus far in the league.

“Kasumba brought something different going forward and I’m’ glad that he was part of the players who subjected Tusker defence to a torrid afternoon,” said Baraza.

Playing with the knowledge that a loss was bound to give undue advantage to Posta Rangers, Tusker and Kakamega Homeboyz in the chase for the runner-up slot, Sofapaka gave Tusker very little breathing space, launching sporadic raids for a lengthy part of the match.

“Truth be told, we dominated the match against Tusker and certainly deserved to win it by an even bigger margin. We adjusted better to the muddy conditions of the pitch and kept prodding their defence and I’m happy with the three points,” said Baraza