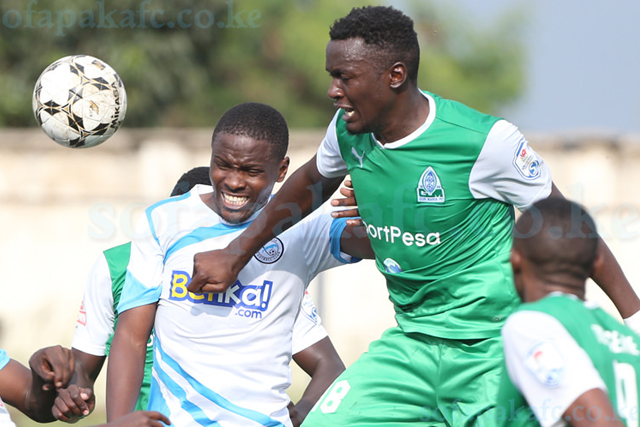 A goal in each half by Blackberry and Meddie Kagere rallied Gor Mahia to a deserved 2-1 victory over Sofapaka on Wedesday September 27 at the Moi Stadium in Kisumu.

In a match that Sofapaka were hungry for the three points in a bid to edge closer to the league leaders, George `Blackberry’ Odhiambo took Gor ahead in the 9th minute after his shot from outside the box went straight past keeper Mathias Kigonya. Meddie Kagere had himself to blame for not doubling Ko’galo’s lead four minutes later, directing the ball after he had been fed with a sumptuous cross by midfielder Kenneth Muguna.

Red-hot striker Umaru Kasumba then continued with his goal scoring prowess with a successful header in the 40th minute to bring Sofapaka back into the game despite offside pleas by Gor Mahia defenders.

Ezekiel Okare and Hilary Echesa were then introduced in place  Morven Otinya and Bernard Mang’oli immediately after the restart as head coach Sam Ssimbwa sought stability in the midfield area.

Echesa then almost proved costly for his side in the 58th minute after committing a needless tackle on Francis Kahata which left the center referee with no option but to point to the penalty spot. Tuyisenge rose up to take the resultant spot kick but missed it, much to the relief of Sofapaka’s technical bench.

Meddie Kagere however restored Gor’s lead in the 63rd minute after connecting to Walusimbi’s cross past Kigonya. Boniface Oluoch ensured his side’s lead was preserved with a brilliant save to deny Okare who had attempted to score from close range.  The league leaders defended their 2-1 lead till the final whistle to register their 14th win of the season and stretch the gap at the helm tp eight points.