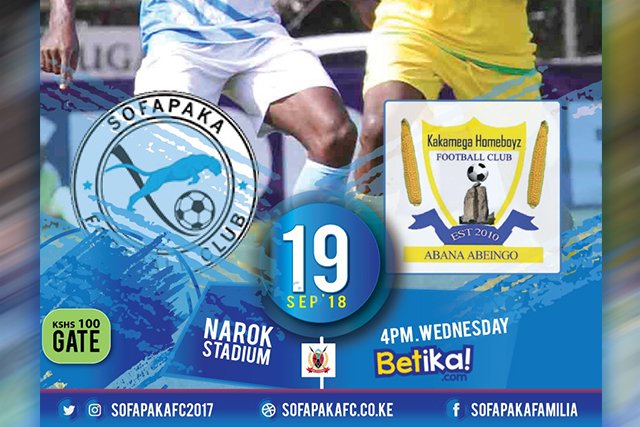 Sofapaka have been boosted by the return of key players ahead of their midweek Kenyan Premier League (KPL) clash against Kakamega Homeboyz at the Narok Stadium from 4pm on Wednesday.
The 2009 champions will now have the services of striker Kepha Aswani who had been nursing a nagging knee injury, as well as Kevin Kimani who had knocks and custodian Wycleff Kasaya who was serving a suspension.
With the availability of Aswani, coach John Baraza will be spoilt for choice on who to start with upfront, between the returning striker, Pistone Mutamba, Stephen Waruru and Umaru Kasumba, all of whom are enjoy a good run of form.
The team will only miss the services of right full back George Maelo who was red carded during their 1-0 league match win against Posta Rangers and is supposed to miss one match.
The match between Sofapaka and the Kakamega side has always produced thrills and never has a favourite.
In their last seven meetings, Sofapaka has beaten Homeboyz twice, drew three times and lost twice. The last time the two sides met on February 10, the tie ended in a 1-0 win in favour of Sofapaka.
Coach Baraza believes it will not be a walk in the park, but he has trained his charges on winning the crucial fixture to boost their bid of finishing the league second.
“Homeboyz has always been a tough nut to crack, but we have prepared well for this match and we are focused on winning the tie to help us move on top of the table,” said Baraza.
Sofapaka who have only won two matches in their last six are placed fifth on the log on 47 points, while Homeboyz who also has a similar record, winning two out of six matches, are placed ninth on the log with 40 points.