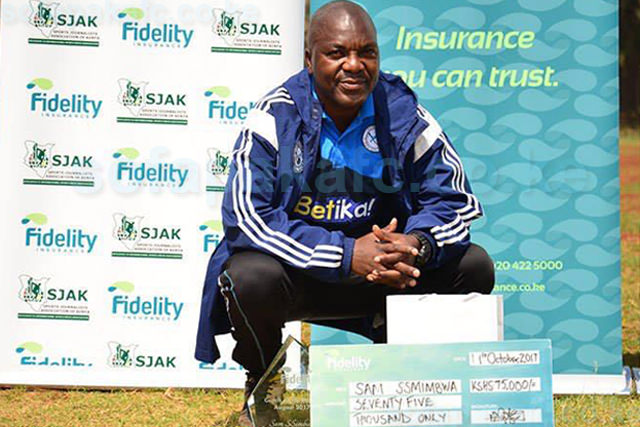 Sofapaka head coach Sam Ssimbwa has won his first award in Kenyan football after being named the August 2017 Kenyan Premier League (KPL) Coach of the Month and duly feted at the team’s training base, Eastleigh High School ground. He was awarded the trophy and Kshs 75,000 during a brief ceremony courtesy of sponsors Fidelity Bank on Tuesday 17 October.

He beat Gor Mahia’s head coach Dylan Kerr as voted by the Sports Journalists Association of Kenya (SJAK), having led his team to four wins and a draw in the month, a run which also placed Sofapaka well in contention for the KPL title.

Currently they are no 2 and 1 respectively in the super league standings. Sam got 18votes while his competitor got 6votes, to clinch the coveted award.

Since it began in March this year, Coach Ssimbwa becomes the fifth recipient of the award and follows Gor Mahia coach Jose Marcelo Ferreira, Posta Rangers coach Sammy Omollo, Tusker FC’s George Nsimbe and Omino, who bagged the accolades in March, April, May and June/July, respectively.

On his part he said “We started the league as underdogs but it’s commendable we have done well, especially in the second leg. There is a slim mathematical possibility of getting to the title but Gor Mahia have a huge advantage. Anything is possible in football though, and all we need to do is just win our matches one after another.”