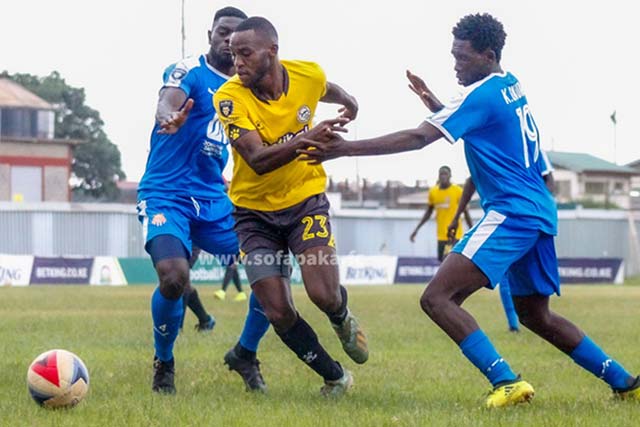 The host got onto a high note in the game-winning a penalty with just three minutes of play, Peter Opiyo made no mistake to slot the first of three for City Stars 12 minutes later City Stars scored the second through Davis Agesa, the midfielder lashed on a lost ball which keeper Aigba Moubarak failed to deal with to make it 2-0. With hosts the better side in the first half took full advantage and control of the encounter in the 28th minute, former AFC Leopards defender Abdallah Salim headed in past Moubarak in goal.

Juma’s miss
In the 28th minute we were forced to make an early change in the tie, Nixon Omondi paved way for Alex Imbusia, his introduction injected more punch up front and five minutes later we were awarded a penalty. Unfortunately, Juma failed to convert from the spot to reduce the deficit only for his attempt to hit the bar with the keeper beaten.

Aigba’s red card
More misery would ensue in the closing stages of the first half as we were reduced to ten men, keeper Aigba Moubarak received his marching orders after being red-carded for a foul play on Nicholas Kipkirui.

Omondi’s save
The final phase of the match produced a good fight from the lads, just after the restart, Kevin Omondi pulled up a huge save, the custodian paired away Anthony Kimani’s effort from the spot

Okal’s miss
Roy Okal almost pulled one back but we were denied by the crossbar yet again. A hard shot on goal by Timothy Otieno was too hard for Njuge to handle, the City Stars keeper save was followed up by Okal who chipped the ball over the keeper only to be denied by the bar.

The host held firmly to their 3-0 lead to mark revenge for their first-leg defeat in Wundanyi.