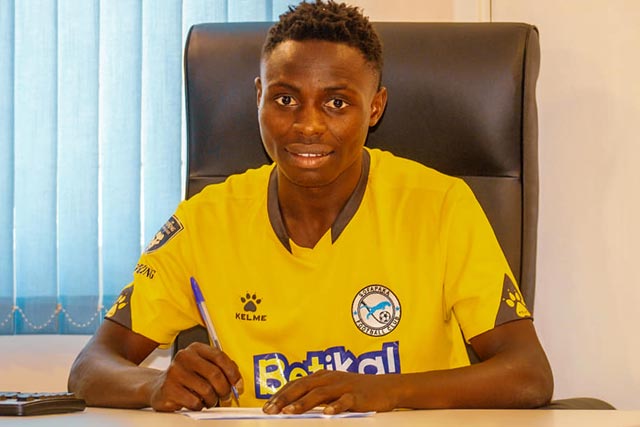 Robert Kharisa Ponda made his debut for the club a fortnight ago in a 2-1 defeat against KCB.

Despite not having one of the best debut one would wish for, the youthful forward was delighted to have made his debut for the club, this what the striker had to say;

On his feelings on joining the club
It was one of the best feelings and achievement for me because I joined one of the top clubs in the country. You rarely find such opportunities with such top side’s at such a young age and that’s why am delighted I joined the team.

On his debut match
It is every player’s dream to play at the top level and so was my dream too. Playing my first ever premier league match was such a deep great feeling for me. Despite going down I felt satisfied because I had made another achievement of playing at top level.

On second successive game
Getting playing time in my second successive game against Gor Mahia came as a surprise because it was a huge match with huge expectation and atmosphere. I am glad I had another chance to experience the premier league and am so hopeful for many more in future assignments.

On targets as a point man
My playing position as a striker demands for goals upfront. Being new at the club with the demands for results comes with pressure but am taking my time because it is a new adventure and learning process. I belive once am well settled the goals will flow.

The striker concludes by thanking the boss for trusting in his abilities ; Am so grateful to the head coach for handing me top flight experience and my only way of thanking him is by doing what am entrusted to do upfront and I hope to soon do so”

Ponda who hails from Malindi joined the club from Ruiru Hotstars.