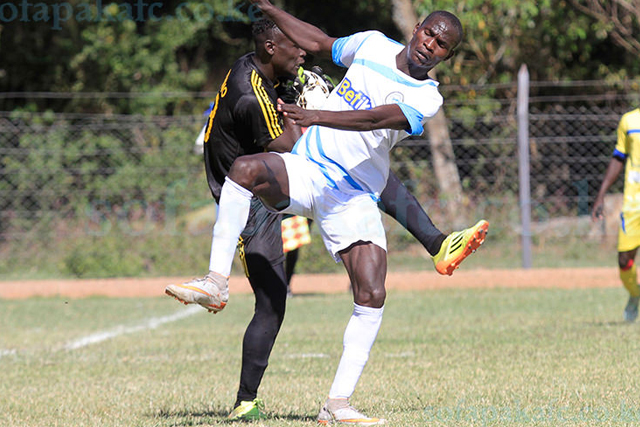 Sofapaka striker Umaru Kasumba may not hit his target of bagging the top scorer’s accolade in his first taste of the Kenyan Premier League (KPL) after picking an injury that will see him miss a few of the team’s remaining matches.

Kasumba picked a shoulder injury in the team’s training on Tuesday and head coach Sam Ssimbwa has confirmed he traveled to Uganda for treatment and will not be fit for the next two matches, when Sofapaka faces Mathare United and Sony Sugar.

“He will definitely be out, and has traveled back home to continue with treatment; we may have him back for the last two matches of the season, against Tusker FC and Zoo,” Ssimbwa told Soka.

The striker has been a hit at the team, having joined in midseason and has so far netted 11 goals in 13 matches and he is just a goal behind the leading duo of Gor Mahia’s Jacques Tuyisenge and Nakumatt FC’s Kepha Aswani.

Ssimbwa admits it will be a blow to miss him but is confident the available players will do the job, with the target still being to finish second.

“He will be missed, definitely, considering the kind of performance he has been putting in but again we have others to fill up and I believe they will deliver. I trust my players,” he added.

Simbwa’s side has no more injury concerns and the coach confirms Humphrey Okoti, who had been out with a hamstring injury is back in training and in contention for the midweek game, against Mathare United.

“Okoti is improving well and he has started training. He may be available in the next game. So apart from Kasumba, we do not have any other injury concerns,” he noted.

Heading to their 31st match of the season, Sofapaka have managed 48 points.