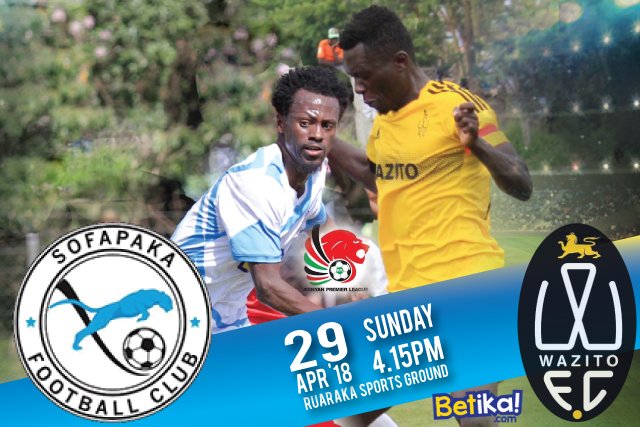 For two consecutive matches since he took over Sofapaka’s coaching reins following the departure of Sam Ssimbwa, the team’s interim trainer John Baraza has presided over two draws away.

Sofapaka held Sony Sugar to a 1-1 draw in Awasi on April 2 before settling for similar results against Chemelil Sugar at Chemelil Complex on April 21,

To most Sofapaka’s fans, the results are fair and that Baraza has done his best especially given that away matches especially in Nyanza are always intriguing.

Baraza, however, has declared that the match against Wazito in Ruaraka on Sunday will give the team ample time to improve on the two results in the team’s bid to challenge for the KPL crown.

Sofapaka are placed in the eighth position in the KPL chart behind Chemelil Sugar, AFC Leopards, Ulinzi Stars, Bandari, Mathare United and table-topprs Gor Mahia, but Baraza firmly belives that Batoto Ba Mungu have the chance of scaling the ladder to wrestle for the honours.

“Of course, the league is not easy but I have this feeling that Sofapaka have an equal chance of winning the title just the teams above us. We need to keep working hard to win our remaining matches and see what happens after there,”

He added:” We may have stumbled at some point but winning the remaining matches is not too much to ask,”quipped Baraza, himself a former player at Sofapaka, Chemelil Sugar and Yanga of Tanzania.

Baraza who has been given a free hand by the management to field a squad of his choice can rest easy in that players like Kepha Aswani, Stephen Waruru and Mohammed Kilume have peaked up in training and are thus valuable assets in not only the weekend match but the rest of the fixtures this season as well.

Ugandan striker Umaru Kasumba who has had a goal drought is also vouching to prove himself in the game, so is his fellow countryman in goalkeeper Mathias Kigonya who has endeared himself with fans due to his penalty conversion rate. Kigonya also believes that Wazito are beatable.

“If we can demonstrate what we have learned in training, we should not have difficulty beating Wazito. We just need to believe in ourselves and the rest shall fall in place,” said Kigonya.