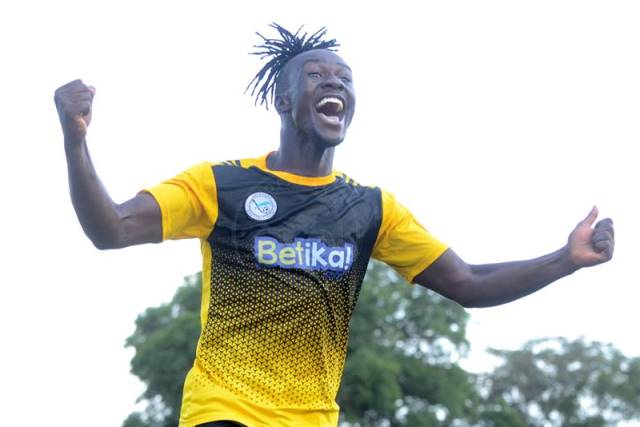 John Avire’s glancing header at the stroke of halftime saw Sofapaka beat AFC Leopards 1-0 at the Bukhungu Stadium in Kakamega on Wednesday to move top of the Kenyan Premier League standings with 33 points, one ahead of Bandari who have a game in hand.

It was a game of two halves with Sofapaka dominating the first half while the hosts AFC leopards saw most of the ball in the second 45 minutes.

In the fourth minute, Sofapaka had a chance when Brian Magonya put Piston Mutamba through with a defense splitting pass, but the lanky forward’s attempt to cut it back to the edge of the area was blocked.

On the other end, Justin Ndikumana, voted by the technical bench as the man of the match had to be hawkeyed to collect a long range shot from Majid Victor.

In the 18th minute, Batoto ba Mungu came ever so close when Stephen Waruru rose highest inside the box off an Elli Asieche corner, but his effortsailed wide. Justin continued to thwart AFC especially on their dangerous set pieces and the keeper did well in the 33rd minite to fist away an effort from Robinson Kamura.

Sofapaka thought they had the lead nine minutes to half time when Mutamba headed home after George Maelo had put the ball back into the edge of the box from a corner, but the goal was ruled out for a foul.

Sofapaka piled pressure and came close again when Avire was teed up from a freekick by Asieche, but his shot went inches wide. But, there was no denying him at the stroke of halftime, the forward rose unmarked inside the box to head home from Kassumba’s super assist off his outer foot.

In the second half AFC came back a better side and pushed Sofapaka to defend deep.

Ten minutes after the restart, Ndikumana had to be alert inside the box to stick out a foot to cut out Yussuf Mainge’s cross from the right with Whyvone Isuza lurking waiting to pounce.

Sofapaka should have doubled their tally thrice in quick succession. First, Stephen Waruru’s header from an Asieche corner went against the woodwork while Mutamba picked up the rebound but his shot was blocked on the line.

A minute later, Mutamba was sent through on goal by Asieche, but he could not beat keeper Jairus Adira one on one after he stuck out a foot.

AFC pushed and in the final quarter of the game, but Sofapaka stood firm with Ndikumana standing tall in goal to keep out all dangers