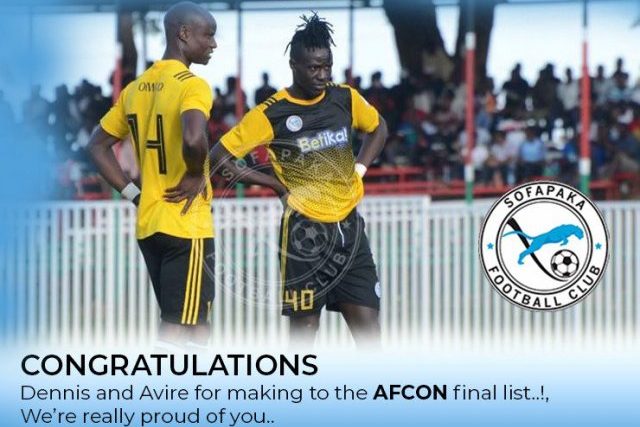 The Sofapaka FC duo of John Avire and Dennis Omino have been included in the Harambee Stars provisional 30-man squad for the 2019 African Cup of Nations. While Omino has been a mainstay in the team playing a crucial role in the qualification, Avire will be making his maiden appearance.

Avire was called up for the Under-23 team for the first time ever in the Olympic qualifiers and has now been given the nod to be among the seniors.

“I am very happy with this chance because it is every player’s dream to play for their national team. Being called up to the AFCON squad is a huge huge thing for me and I promise to work hard to maintain my place in the team,” Avire said.

He added; “I hope I can do enough to go to the Cup of Nations because that would be a massive thing for me. I have to prove in training and in the few matches that remain in the league that I can handle the big stage.”

The two players will hope to be in the squad of 26 that will be selected for a training camp in France and ultimately the 23 that travel to Egypt for the Cup of Nations.

Striker Pistone Mutamba has been included in the African Nations Championship (CHAN) squad where Avire and Omino are also part of. The team will take on Burundi in July in the first round of the CHAN 2020 qualifiers.

Meanwhile, goalkeeper Justin Ndikumana and defender Mousa Omar have also been called up to the Burundian national team preparing for the Cup of Nations. Omar and Ndikumana played crucial roles for the Swallows to aid them to their first ever Cup of Nations appearance.
“It is an honor and we will do our best to not only make the team to Cairo, but also play a starting role and being actively part of the dream,” Omar stated.