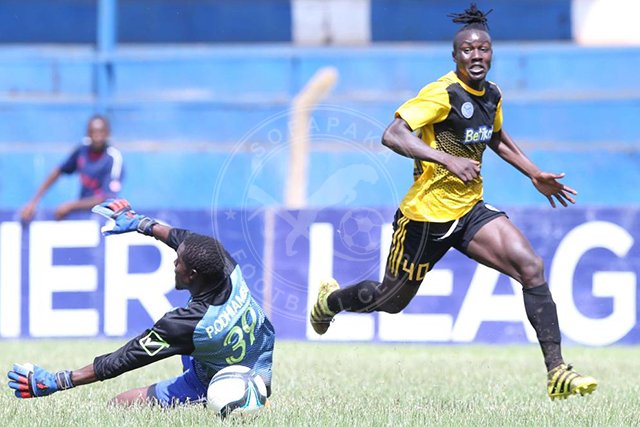 New signing John Avire marked his debut in the yellow and black of Sofapaka with a goal against his former employers as Batoto ba Mungu beat Mount Kenya United 2-1 on Sunday in Machakos.

Avire says the goal he scored has given him hunger to score more and says he will work harder to improve his conversion rate and help the team gun for titles this season.

“To me it was a very good start scoring on my debut and I am hoping for a better season. I love scoring because that’s my job and hitting that goal has given me confidence moving forward and some hunger to score more goals,” the forward stated.

He says he has been received beautifully by the Sofapaka family since joining from Mount Kenya United and he hopes to repay the love he has shown by scoring crucial goals that will see the team bag titles.

“I love the Sofapaka family. It is a good team and I am hoping we can have more teamwork to help us reach our expectations,” he said.

Adding; “My main aim this season is to score goals game aftergame and help the team get silverware. I am optimistic if we all work hard we can achieve our targets. Sofapaka is a big team with a lot of quality and we should end the season with something,”

“Personally, I want to be among the top scorers this season,” he further stated.

Avire joined the team from Mount Kenya United and has also played for Bandari having graduated from Passenga High School.