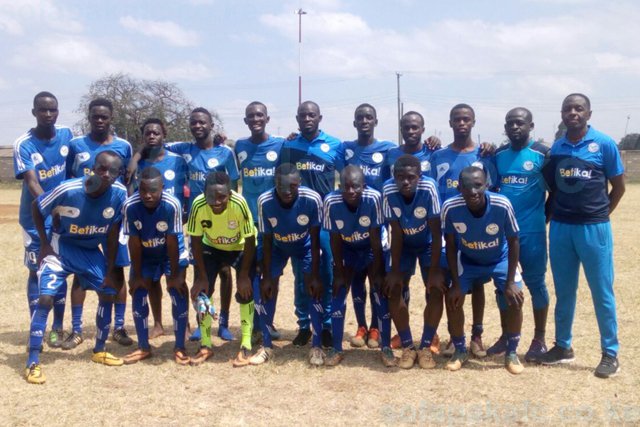 Sofapaka Youth Team coach Edward Munandi has tipped several of his players to break through the ranks pretty soon and make it to the senior side given their improved performance in the Nairobi City County League.

Munandi singled out goalkeeper Timothy Ngugi, midfielder Patterson Olwongo, striker Evans Ogila and the defensive trio of David Odhiambo, Hussein Maina and Duncan Okoth as some of the players who have shown a lot of maturity lately in the game.

“Sofapaka has great youth players to say the least. For me, It is always great working with players who are willing to learn and my wish is to help them take their performance to the next level. Their physical and mental strength is fantastic,” offered Munandi after taking the team through workouts at Eastleigh High School ground.

Munandi, an alumnus of the ‘football crazy’ Ofafa Jericho High in Eastlands, said it is incredulous for Batoto Ba Mungu lads to be currently placed fourth in the league chart despite the team’s late entry to the season.

“This is quite encouraging and as a coach you must be happy about that. The players have now started believing in themselves and at this rate, you can rest assured we shall have a good feeder team for the senior side in future,” said Munandi.

Among the junior players who are on record of having been promoted to the senior level are Mohammed Kilume, Brian Magonya, Reuben Juma, and Edmond Kwanya

Apparently, the current players are leaving no chance in applying all the tricks contained in the coaching files of Munandi, a no-nonsense central defender during his heydays with former KPL sides Utalii, Kenya Pipeline, Oserian and even his Ofafa Maringo neighbourhood team Bedjos during off-season tournaments.

During Sofapaka’s first match against Silver Strikers at Eastleigh High School ground which they won 2-0, Ogila scored a brace and accounted for a hat-trick in the 5-0 massacre of Lule 24 hours later.

Batoto Ba Mungu juniors next face Glory Outreach this weekend and do hope to continue with their cameo performance.