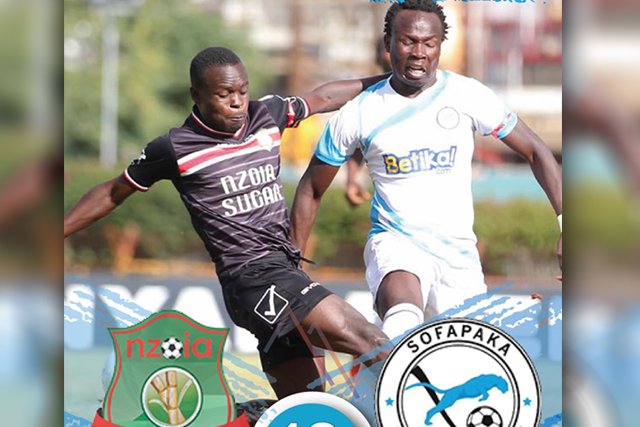 After a shock 1-0 defeat at the hands of Vihiga United in a SportPesa Premier League(SPL) match in Nairok last weekend, Sofapaka are vengeful and can’t wait to vent their anger on their next opponents
Nzoia Sugar who they meet this Saturday at Sudi Stadium in Bungoma.
Sofapaka Head Coach John Baraza said his charges have put behind them the disappointment of the ignominious loss and are focused on the Nzoia match hoping to reap maximum points at a venue that is reputed as one of the most dreary in the SPL.
“Honestly, the goal we conceded against Vihiga was gift of sorts after giving our all in the match. These things happen in football but common sense dictates that to make an error is humane but to repeat
the same is unacceptable,” said Baraza.
The tactician who took over from Ugandan Sam Ssimbwa a couple of months ago said that since the fateful evening at Narok sub count stadium last Sunday, almost all the departments have improved ahead of the encounter against Nzoia.
Perhaps in a bid to send his point home, Baraza presided over Sofapaka’s 4-0 win over Nairobi provincial league side Wajiji FC in a friendly match at the team’s training ground at Eastleigh High School today with on-song Umaru Kasumba and his strike partner Pistone Mutamba among the scorers.
Just like Baraza, Sofapaka players have expressed concern with the defeat by Vihiga and have declared that there is no room for more errors in the fixture in Bungoma.
“It was disappointing but I must say we had a bad day in office. There was an element of lack of concentration on our side and that was when Vihiga notched the winning goal,” said the team’s custodian Mathias Kigonya.
Offensive midfielder Edmond Kwanya said they were victims of hard luck and urged the team’s fans not to read too much into the result. “We did almost everything right but Vihiga United came out of the blues to score a goal that would eventually won them the day. We hope to atone for the loss against Nzoia,” he said
Sofapaka are placed in the fourth position in the standings with 43 points from 26 matches and will be angling to win their remaining fixtures to overtake AFC Leopards and Bandari and Gor Mahia who are
above them in the pecking order.