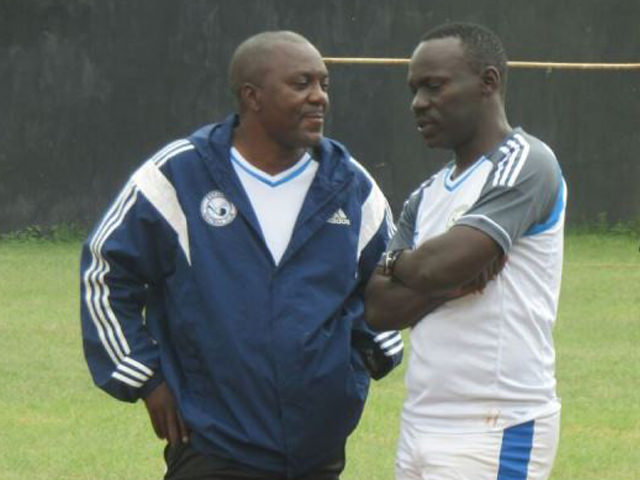 Kenyan Premier League (KPL) title contenders Sofapaka will be hoping to make a recovery after their inexplicable 2-1 loss at the hands of Ulinzi Stars three days ago when they face Kariobangi Sharks at Kenyatta Stadium in Machakos on Saturday.
During the match against Ulinzi Stars, Sofapaka created a litany of chances which went to waste and one hopes that Head Coach Sam Ssimbwa and his deputy John Baraza have rectified the frailties for their charges to sink Sharks in the “Eastlands Derby”.
Baraza noted that while the team gave a good account of themselves, there were glaring frailties in the attacking line which needed to be addressed.
“Ulinzi were worthy opponents but I think it would have been a different story altogether had we taken all our scoring chances. Hopefully, the players have learned and will get it absolutely right during the match against Kariobangi Sharks,”
Both Sharks and Sofapaka appear of the same context of strength although it would be safe to say that  Batoto Ba Mungu will be the ones under pressure to conjure up a descent result after falling 3-1 to their opponents the last time the teams met, in the GOtv Shield Cup.
Yesterday, Sofapaka Technical Director Martin Ndagano declared that it is pay-back time, adding that another loss to Sharks would be too bitter a pill to swallow for Batoto Ba Mungu.
“Although it will be a match like any other, losing to Sharks for the second time in the season will be unacceptable. I’m glad that we are meeting Kariobangi Sharks at a time when we are in an alluring form and God-willing, we will dispatch them (Sharks) and increase our chances of lifting the title,” said Ndagano who previously served as Sofapaka’s Head Coach.
For Sofapaka, they will only be too eager to take full advantage of Kariobangi Sharks’ set-back after four of the latter’s key players including Bolton Omwenga, Mike Misigo, Eric Juma and John Oyemba were ruled out of the match due to nagging injuries.
But Sofapaka defence will have to be on full alert to avert forays by Sharks lethal trio of Masoud Juma, Ovellah Ochieng’ and Patillah Omotto.
However, suffice to say, if these three players are Kariobangi Shark’s mainstay, then the William Muluya-coached team can only fail to mark Sofapaka Ugandan strikers Umaru Kasumba and Ali Feni at their own peril.
Kasumba, who has been ‘bullying’ opponents defenders almost to submission, will be among players who will be key to success for Sofapaka who are battling Gor Mahia for the KPL title.
Last five matches – Sofapaka v K/Sharks
SOFAPAKA
K/SHARKS