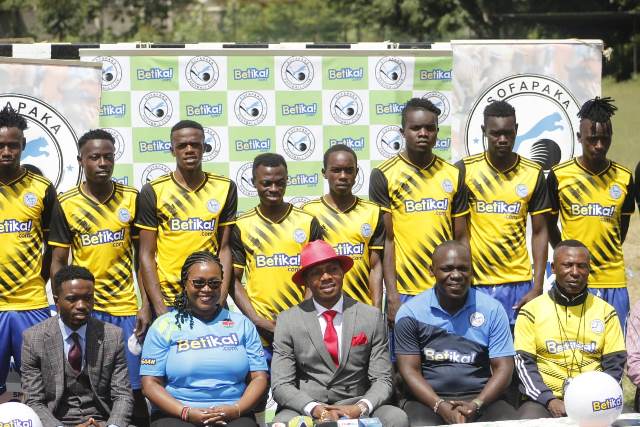 Sofapaka FC today unveiled 11 new players to help them mount a strong charge to the remainder of the season as they hope to win the league title they last won in 2009.
Among the 11 are four highly rated foreign player and two youth players who have been promoted to the senior team due to their current form and two unattached players.
The foreigners include goalkeeper Nicholas Sebwato from Bright Stars Soccer Academy in Uganda, defensive midfielder Noukeu Joel from Lion Blesse Fc in Cameroon and Ghanian striking duo of Jedinak Ameyaw Nana and George Owusu, both from Channis Soccer Academy.
The players promoted from Sofapaka Youth team are defenders Stephen Otieno Okulla and Brian Wetende.
David Simiyu and Collins Wakhungu have joined from milling sides Chemelil and Nzoia Sugar respectively.
Sofapaka president Elly Kalekwa said he had confidence with the new players and said he was banking on them to help the side to a podium finish at the end of the season. He also lauded the support from
jersey sponsors Betika, which he said went a long way in helping the running of the team as well as motivation of players.
Betika Marketing Manager Jacky Tonui expressed satisfaction with the Sofapaka’s performance during the two year span the firm has partnered with the team, adding that they feel honoured to be part of the team during the transition period.
“We reaffirm our commitment to supporting football talent in line with our deliberate policy to give back to the society. I hope the new recruits will add value to the team and we wish them the best of
luck,” said Tonui.
The team’s coach John Baraza described the development as a dawn of a new era and reckoned that the new players have the willpower and zeal to take the team to a new level.
“We are lined up for consecutive games and must make catch-up and nothing was as good as bringing on board energetic players to realize our dream. The idea here is to go for consistency and I hope the young players will learn a lot from the older lot moving forward,” said. Baraza as he prepares to unleash his new squad against Kariobangi Sharks in an early kick-off on Saturday.