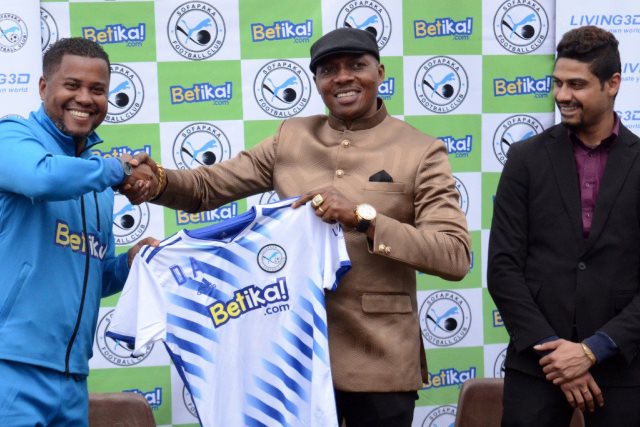 Newly appointed Sofapaka head coach, Angolan Divaldo Alves has vowed to return the big boy tag to the club after he was officially unveiled yesterday.
Alves who has been with the team for two weeks now, was unveiled to the media alongside 11 other players, at the Eastleigh High School on the eve of the 2019/2020 Kenyan Premier League, where they kick-off their title campaign against Posta Rangers at the Narok Stadium on
Friday.
“This is one great family and I’m very excited to be part of it. We have very good players in all positions and if we are able to gel fast, we are definitely a force to reckon with this season,” said
Alves.
He added: “I want us to play continental football next year. We will be going for every available accolade this season, definitely our priority is to win the league title after ten years drought, but we also want to win everything.”
Sofapaka president Elly Kalekwa said the coach was identified by their partners Living 3D, a Singapore based company, who will be paying his salary and also market the team players in major Asia and European leagues.
Sofapaka who began last season on a wrong foot, going for seven matches without a win, that saw them finish the campaign in the fifth position, hope to start the new season with a bang.
Their key signing is goalkeeper Djehani N’guissan Yao who is the first choice custodian for Togo’s national team. He joins the 2009 from Togo league giants ASCK.
Other players unveiled yesterday include international and former Gor Mahia player Timonah Wanyonyi, highly rated former Gor Mahia midfielder Cersidy Lumumba and bullish striker Wanjala Muchuma who joins from Chemelil Sugar.