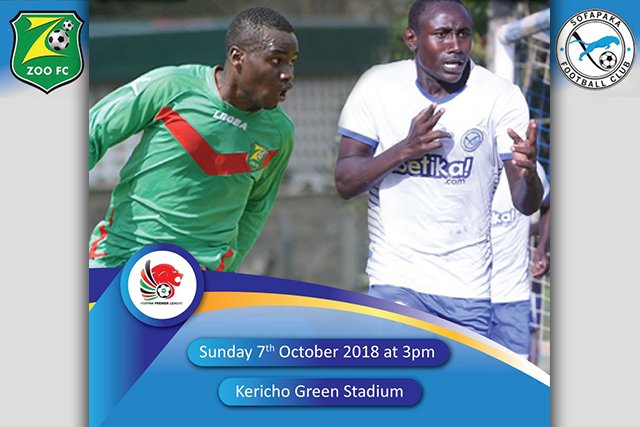 Former league champions Sofapaka FC are keen to finish the season on a high as they visit Kericho to play against Zoo FC in the final match  of the 2018 Kenyan Premier League on Sunday.
According to head coach John Baraza, the match is crucial as they seek to finish the season on a winning note. “The league title was won long ago and even the second place, but it doesn’t mean that our match against Zoo FC is a formality. We are not going to take it lightly, we have to win and end the season on a high note, so that we can continue from where we left when the new season begins next month,” Baraza said.
He added: “The attitude of the players is good and the morale is high, they want nothing less than a win.” Baraza will, however, miss the services key striker, Ugandan Umaru Kasumba who has nine league goals so far. Kasumba suffered an ankle > injury during their 2-2 draw against Nakumatt last weekend is is > likely to be out for three weeks. Veteran midfielder Ibrahim Kitawi will also be missing in action,
despite the fact that he resumed training this week after recovering from a fractured skull after colliding with a team mate during  training two months ago.
“Kasumba has been ruled out of our final match due to an ankle injury and Kitawi still doesn’t have match fitness, despite returning to full  training after recovering from a head injury,” said Baraza.
The 2009 league champions have, however, been boosted by the return of Rwanda international Mico Justin who has been missing in action after  he requested some time off to sort out his personal issues.
Sofapaka are at the moment fifth on the log with 52 points from 33 matches and a win against Zoo may see them finish the season third if Ulinzi and Tusker lose or draw their respective matches against
Mathare United and Gor Mahia on the same day.