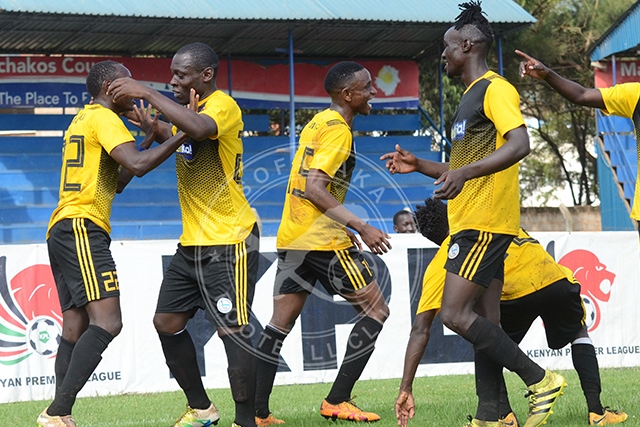 Sofapaka began their 2018/2019 season campaign on a high with a 2-1 win over Mount Kenya United in Machakos on Sunday. New signing John Avire and skipper Stephen Waruru scored a goal in either half with Mount Kenya’s solo strike coming off Amani Kyatta’s penalty.

Sofapaka started the match well and had their first chance In the sixth minute when Waruru whipped in a cross from the left, but both Michael Oduor and Cliff Kasuti could not get the ball on target.

Debutant Richard Aimo was called into action after eight minutes doing well to put his body behind the ball to block a well taken freekick by Samuel Ndung’u.

The home side came close in the 12th minute when Tevin Opondo rounded Aimo, but his eventual shot hit the post. The Sofapaka defense managed to track back and hit the ball away to safety.

The game was beginning to gather momentum and five minutes on the other side, Sofapaka had a chance when Waruru skipped away from the keeper but his attempt at cutting back a cross was futile, Mount Kenya clearing the ball away.

He however made amends two minutes to the break when he dived in to head Sofapaka into the lead from a well delivered Titus Achesa cross, two new signings combining for the opening goal.

Sofapaka then doubled their lead eight minutes into the second half when substitute Kepha Aswani who had come on for Mico was brought down inside the box by Amani. Waruru stepped up and made no mistake from the spot sending the keeper the wrong way for a 2-0 cushion.

Mount Kenya drew one back with 15 minutes left when Amani scored from the spot after Aimo brought down Boniface Mukhekhe. However, despite the added pressure, Sofapaka held on for the win.