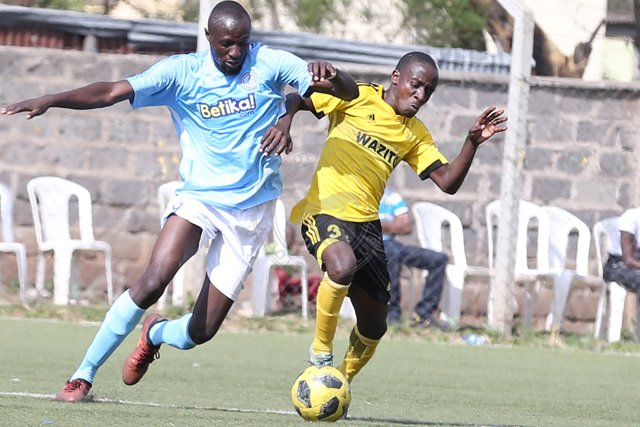 Steven Waruru and Kepha Aswani scored a goal a piece in two minutes as they compounded Wazito to 0-2 loss thereby extending their seven game winless streak in a Kenyan Premier League match played at the Camp Toyoyo on the afternoon of Saturday 30 June.

Wazito were out to overturn their wretched form of seven games without a win, coincidentally their last win coming against Sofapaka two months ago. John Baraza’s charges on the other hand were looking to build on their win against Tusker last time out in the league while also seeking revenge for their shock loss against Wazito. Frank Ouna handed debuts to Edwin Lavatsa who had been rumored to on the verge of joining Tusker. Sofapaka had a familiar former Wazito player leading their attack, partnered by former AFC Leopards and Nakumatt talisman Kepha Aswani.

Sofapaka started with much intent and did take look to break the deadlock through Kepha Aswani who dinked the ball over the goalkeeper Steven Njuge to hand Batoto Ba Mungu the precious early lead in the 18th minute. Wazito suffered a lapse in concentration when former Ulinzi Stars striker Steven Waruru doubled the lead inside one minute after the restart nodding in the ball home after Elli Asieche floated in a brilliant corner.

Wazito steadied their ship enjoying some decent spell of possession as they tried to pull a goal back before the half time whistle. Their efforts were however unfruitful as the half drew to a close with Sofapaka leading 2-0.

Frank Ouna had some stern words for his boys at the break as they resumed the half a much rejuvenated side dominating the early opening exchanges. Wazito thought they had halved the deficit when Joakim Ollomo’s free kick kiss the underside of the cross bar before bouncing it’s way out of the goal mouth. Wazito continued to press on for a goal that would make the tie more interesting. Omollo was a constant threat with his swerving hard hit set pieces and almost bagged a goal when his free kick beat Kasaya but Yousuf Mohammed cleared the ball off the line.

Sofapaka held on for the win which maintains their pressure of Gor Mahia at top spot while the loss compounds Wazito deep into the relegation zone.