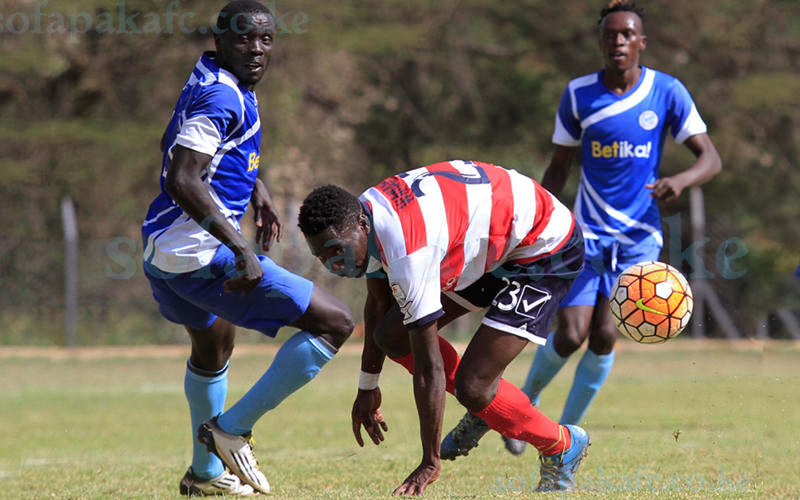 Sofapaka FC kept alive their slim chances of clinching the Kenyan Premier League (KPL) following a 2-0 victory over AFC Leopards at Narok County Stadium.
Ugandan import Ali Feni was the hero for the resurgent Batoto Ba Mungu after scoring a double that downed Ingwe before an estimated 5,000 fans. Feni  was particularly a constant menace to Leopards rearguard in the early exchanges and Umaru Kasumba, who has ten goals so far in Sofapaka’s  KPL campaign, missed two clear-cut chances towards the end of the first half.
Speaking after the match, Sofapaka Head Coach Sam Ssimbwa said winning the match has given the team the much needed inspiration to challenge table-topping Gor Mahia for the title.
“We had a game strategy and I’m glad it has worked to our advantage. I must say that this victory means a lot to us and we need  to keep on working extremely hard to achieve our ultimate bench-marks. I believe the league title is well within our reach,” said Ssimbwa who rung several changes in the team which lost 2-1 to Gor  Mahia at the Moi Stadium in Kisumu last Wednesday.
Sofapaka’s  defence line of Willis Ouma, Rodgers Aloro and Kennedy Oduor also rose up to the occasion by constantly thwarting scoring attempts by Leopards duo of enterprising winger Samuel Ndung’u and Burundian striker Alexis Kitenge.
Sofapaka are trying  to play catch-up to Gor and are back to the second position after dropping a few places in the league chart following its amendment after Kericho Zoo and Nakumatt FC were suspended.