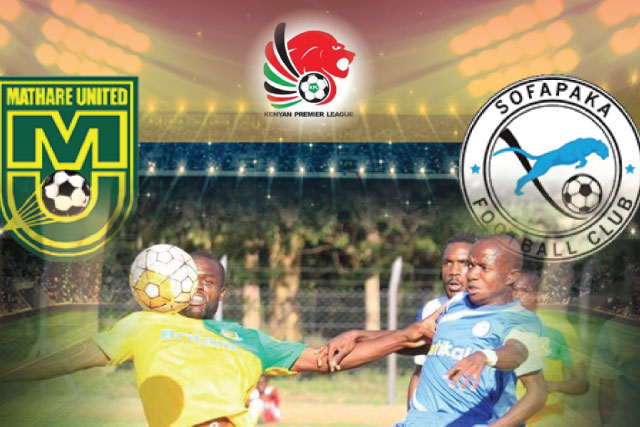 Sofapaka will be hoping to continue from where they left in the 2018 Kenyan Premier League (KPL) when they date Mathare United at Kenyatta Stadium in Machakos on Sunday.
Buoyed by a 1-0 win over Kakamega Homeboyz at Mumias Complex ten days ago, this will be Batoto Ba Mungu’s biggest test as they will be meeting an inspired Mathare side that is topping the league chart.
Sofapaka deputy coach John Baraza has acknowledged that it will be a daunting task against Mathare due to the ‘slum boys’’ current pedigree.
“The league is still in its infancy stages, but when a team is leading in the league like Mathare are, it should not be handled with kid gloves lest the worst happens. But that does not mean that Sofapaka will be attempting to do the impossible since we also have mental strength to prevail over them (Mathare),” remarked Baraza.
Since the Kenyan Premier League kicked off early this month, most teams have experienced a goal drought among them Sofapaka.
During their opening match against Bandari, Sofapaka came short in as far as marksmanship is concerned as they went ahead to lose 3-0 to the dockers.
Sofapaka made improvement in their second match by overcoming Kakamega Homeboyz although the team’s handlers felt the strikers still have much to do to score enough goals.
But it seems there is light at the end of the tunnel for Sofapaka in exorcising the ghosts of failure to pump in enough goals as the team bounced back to hammer Nairobi regional side Headquarters 7-0 in a friendly match at Eastleigh High School ground on Wednesday.
“It’s encouraging to see players coming out of their cocoons to score as they did against Headquarters. They need to score goals and this is the cardinal rule we have been inculcating in them. But we also need to be cautious at the rear since Mathare have slippery strikers,” said Baraza.
The tactician has ruled out making wholesome changes in the squad that beat Homeboyz and Sofapaka fans should expect to see players like Stephen Waruru, Elly Asieche, Hillary Echesa, Maurice Odipo and Umaru Kasumba in action.
Mathare wil be seeking to cement their lead in the KPL and some of the players who will need tight police marking by Sofapaka defenders are Crispin Oduor, Clifford Alwanga and Cliff Nyakeya.