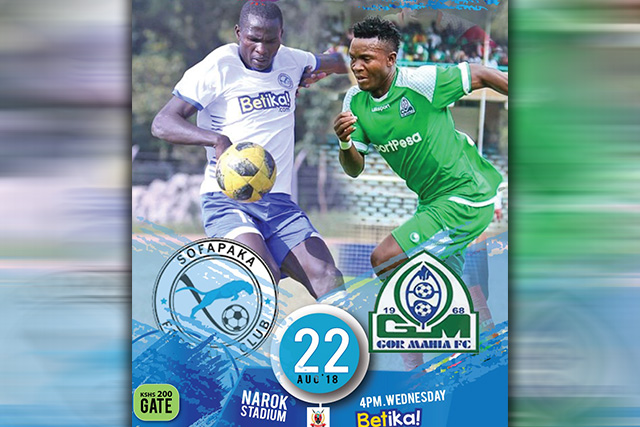 Sofapaka have declared that they will be undaunted by Gor Mahia’s pedigree when the two teams face off in a SportPesa Premier League (SPL) midweek match at Narok sub county stadium tomorrow.

John Baraza, Sofapaka coach,  said he does not think his charges will be victims of stage fright against Gor despite the latter enjoying a purple patch, having come from behind to restrict them to a 3-3 draw in the first leg match on May 20.

“The first leg league result proved that my young team is equal to the task against big guns. Gor Mahia are the cup holders and the fact that they have been playing in high-profile CAF Confederation Cup matches is enough reason to give them due respect. But I must say we are ready for them once more,” said Baraza.

He added that Sofapaka will not be fooled by Gor’s ignominious 2-1 defeat by Rwanda’s Rayon Sport last Sunday, adding that it was a mere slip-up and that they (Sofapaka) expect to meet a vengeful lot.

“The worst we can do is to look at the result of Gor’s match against Rayon. Obviously, improvement is on their minds and we know just how dangerous they can be. We’ll try as much as possible to handle any pressure and God-willing win the match,” said Baraza.

The tactician further reckoned that his team ought to have won in their last match which they drew 2-2 with Nzoia in Bungoma were it not for missed chances.

“We actually created more chances than Nzoia. I have told my strikers to be composed and if that happens, they should be able to rise to the occasion against Gor,” said Baraza.

Granted, Baraza’s message on improvement is one that should be heeded by the likes of Stephen Waruru, Pistone Mutamba, Kepha Aswani and Umaru Kasumba who are shouldered with the main responsibility of banging in goals for Sofapaka.

Gor are on a redemption mission and losing a second match on a trot will be unacceptable to their fans.

Soon after Gor succumbed to Rayon, the team’s Coach Dylan Kerr said his players gave their all but nonetheless note that there were a few grey areas which need rectification before the team’s match against Sofapaka and even beyond when they clash USM Alger in the final CAF Confederation match in Algeria