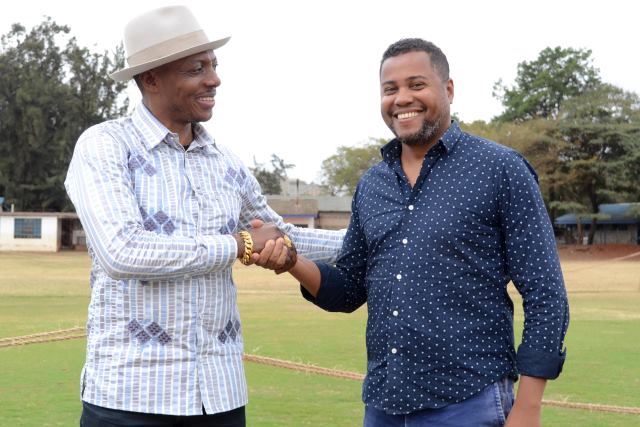 Sofapaka Would like to confirm that Portuguese coach Divaldo Alves has arrived in the country and will take over as the club’s heads coach for the 2019/20 season. Alves is a Portuguese citizen born in Angola to an Angolan mother and a Portuguese father.

He arrived in the country on Wednesday night and visited the team’s training session at the Eastleigh High School on Thursday morning. He was welcomed to the team by president Elly Kalekwa and Team manager Hillary Echesa where he was formally introduced to the team.

On his arrival, Mr. Alves had this to say: “I am glad to be here, this is my first time coaching in Africa but being a person who was born here in this continent, it is a great pleasure for me to come and work here in Kenya. I have been back to the continent many times before doing workshops with coaches in Angola, South Africa and Algeria so finally coming to work here permanently is a pleasure,”

“I have seen a bit of what the players are like from the training session and I must say I am happy with their technical ability in handling the ball, the passing and vision. Of course there are a few things here that we need to change which is normal in football and I promise that we will work on it together,”

“I know that the team has not won the league since 2009 but I am ready to say that we will do the best possible effort, to put our blood on the pitch just to see the team win a title this season,”

“My philosophy is based on attack. I am an attacking coach and I love to have the ball and score. This is my mentality of the game but also we must have a balance between attack and defense,”

“As fans of Batoto ba Mungu I promise that we will work together as a family to achieve results.”

Mr. Alves will watch the team in a friendly match on Friday at Camp Toyoyo before laying out his plans and officially starting work on Monday. He told the players: “We will have to work hard as a team to get results and even if I am hard on you as players, just know it is because I want the best for all of us.”

Club president Elly Kalekwa said; “We are happy to welcome Mr Alves into the team. We trust in his ability and his experience and as a club we have been attracted to his vision and what he wants to achieve. Our hunger is the league title because it has been a long time and we trust he will do it,”

Mr. Alves has worked in Malaysia, Lithuania, Oman and his native Portugal. He will be assisted in his new role by John Baraza as the first assistant coach and Mshagalusha Ndagano as the second assistant.