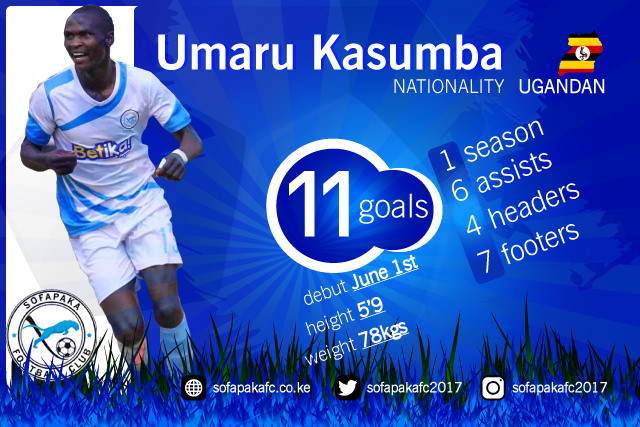 Ugandan hitman Umar Kasumba admits his mission this season is to win the SportPesa Premier League top scorer’s gong. The Sofapaka lethal striker is well on course despite joining the race mid this season.

His latest goal was during Sofapaka’s 2-1 loss to Gor Mahia on Wednesday means Kasumba has now scored 10 league goals in nine games since joining the Kenyan club from SC Villa on June 1.

That’s an average of a goal every game, and just one shy of league top scorer thus far Ulinzi’s Stephen Waruru whose however managed that haul since making his first appearance of the season on April 15 – a match he scored with his first touch in their 1-1 draw against Tusker.

“I want to win that award for top scorer. I am confident and motivated because my teammates told me it comes with benefits,” the strike said.

Kasumba has also scored five times in two games in the GOtv Shield.

According to the Kenya Premier League portal, the Kampala-born player has netted seven goals with his right foot and three others via his head. What’s more, four of the 10 goals were match-winners. The pacy dribbler also boasts five assists.

“The Kenyan league suits me very well because players fight for the ball all the time, I prefer physical challenges. But I only want to play here for one season before transferring to a European club like Olunga,” the player added.

Up next for Kasumba is a league assignment versus AFC Leopards at Narok Stadium this coming Sunday.