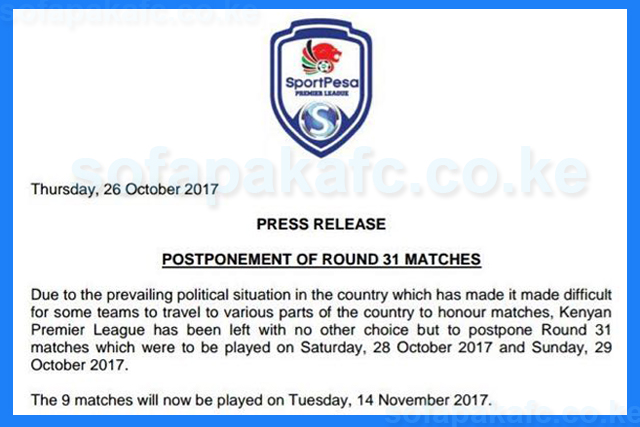 Round 31 fixture of the Kenyan Premier League (KPL) action will not take place this weekend as earlier scheduled and have been postponed due to the prevailing political situation in the country.

Apparently some teams were unable to travel for the matches. The 9 matches will now be played on Tuesday, 14 November 2017. Round 32 matches, which are to be played on Wednesday, 01 November 2017, will go on as planned. The letter said.

“Due to the prevailing political situation in the country which has made it difficult for some teams to travel to various parts of the country to honour matches, Kenyan Premier League has been left with no other choice but to postpone Round 31 matches which were to be played on Saturday 28 October and Sunday 29,” the statement by KPL read in part.

“KPL understands the strain this will have on clubs as the season is set to conclude on Saturday November 18, therefore a request will be made to the Football Kenya Federation (FKF) to surrender the Fifa weekend of 11/12 November for the scheduling of league matches.”

“However, this is not guaranteed as FKF had earlier this year stated that they intend to make use of all Fifa dates.”

Attached please find a copy of that press release.