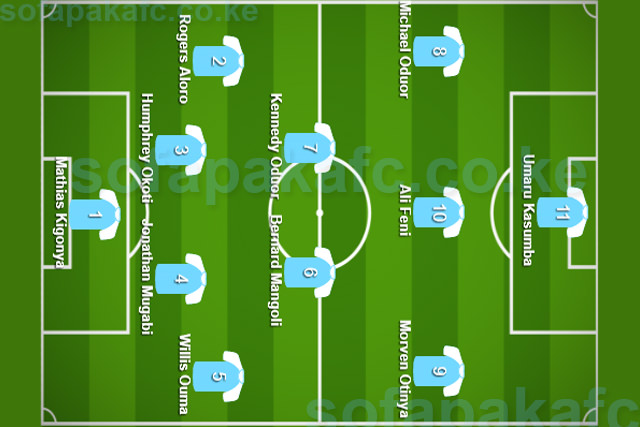 Sofapaka head coach Sam Ssimbwa has unleashed a strong starting lineup that is set to take on Gor Mahia on Wednesday September 27, 2017 at the Moi Stadium in Kisumu.

From the team that lost 2-1 to Kakamega Homeboyz, Ssimbwa has made seven changes to match Gor Mahia’s strength with an aim of overcoming the league leaders.

After missing the last four games through a shoulder injury, first choice goalkeeper Mathias Kigonya makes his way back into the starting lineup and will be shielded in defense by Willis Ouma, Aloro Rodgers, Okoti Humphrey and Mugabi Jonathan. Kennedy Oduor and Bernard Mangóli will pair up in midfield while the attacking trio of Michael Oduor, Ali Feni and Morven Otinya play just behind sole striker Umaru Kasumba.