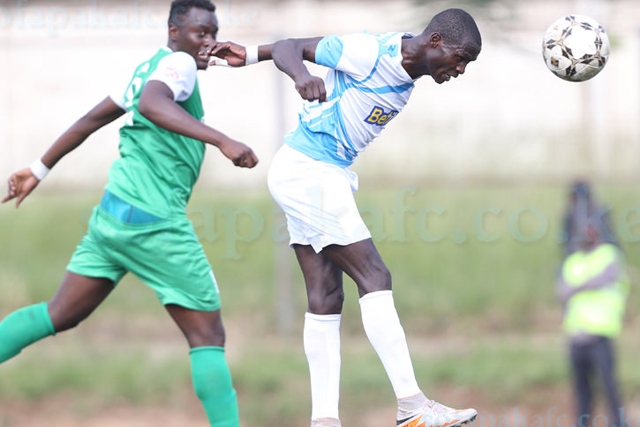 Sofapaka Ugandan striker Umaru Kasumba who has recovered from injury is more than desirous to catch up with the leading pack in the chase for the Kenyan Premier League (KPL) Golden Boot Award.

Kasumba was in his homeland in Uganda for treatment after picking up a shoulder injury which he has since shrugged and is ready for the two remaining fixtures that will determine who carriers.

‘I’m back in Kenya and can’t wait to continue shaking the net in the KPL. Honestly, getting injured was the last thing in my mind but here I’m as fit as a fiddle. Since I landed at Sofapaka my ultimate dream was to score the highest number of goals and God willing, this will happen,” said Kasumba soon after Sofapaka’s training session at Ruiru Stadium.
Kasumba who has mesmerized Kenyan fans with his scoring antics added: “I have trained for two days now and if all goes well, I should plunder more goals on Saturday,” added Kasumba in reference to the much-talked clash against erstwhile champions Tusker in Ruaraka.

So far, Kasumba has netted 11 goals, one shy of the 12 struck by Gor Mahia duo of Jacques Tuyisnge and Meddie Kagere and Nakumatt’s Kepha Aswani as Kariobangi Sharks’ Masoud Juma tops with 15 strikes to his name.

Kasumba faces a monumental as he will need to score at least four goals against Tusker and hope Masoud stall if he is to be crowned KPL goal-scoring king.

However, Kasumba reckons that if the worst gets to the worst, he won’t mind winding up amongst the three best top scorers.

“Scoring four goals in one match is not child’s play bit it is possible. If I will be fielded, I will strive in covering almost each blade of the grass on the pitch to achieve what I want,” said Kasumba.