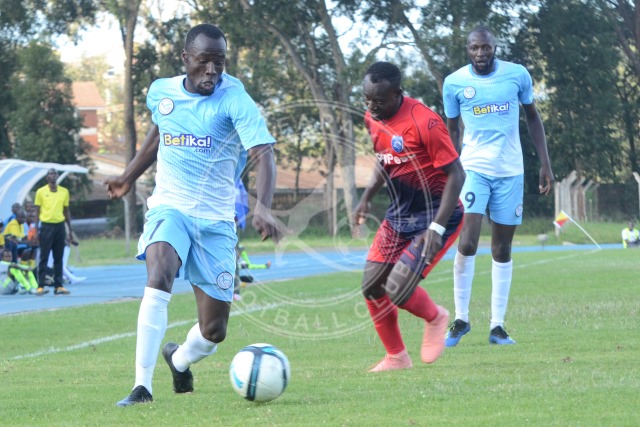 Debutant Cornelius Juma scored in the 89th minute as Sofapaka twice came from behind to salvage a point in a hotly contested 2-2 draw against AFC Leopards at the Kenyatta Stadium in Machakos on Saturday.

Marvin Nabwire had scored first for AFC before Mike Oduor’s beauty of a goal made it 1-1 five minutes into the second half, AFC went ahead again through Aziz Okaka but Juma who was signed just this week ensured the spoils were shared in the tough evening tie.

The visitors were the better starters in the tie and they got into the lead after just four minutes when Nabwire slammed the ball into the net from the edge of the area after keeper Richard Aimo’s clearance fell kindly on his path.

Sofapaka tried to claw back level and in the eight minute, John Avire had an effort from a freekick go wide. Dennis Odhiambo was next in line to try his luck from distance but again his shot couldn’t hit the target.

The team was forced into an early sub half hour in after defender Humphrey Okoti limped out clutching his hamstring and was replaced by Soter Kayumba, coming in also to make his debut. The team had also been forced to make a change before kick off after Justin Mico injured his knee at warm up.

In the second half, Sofapaka came back better and they went back level five minutes in when Oduor’s beauty of a long range effort dipped over AFC keeper Eric Ndayishimiye.

The goal ignited some boost of confidence in the team as they attacked more. Coach Melis Medo made another change bringing in Kepha Aswani for Piston Mutamba while on the hour mark, Stephen Waruru came on for Kasuti Cliff.

In the 65th minute, Oduor came close to completing a brace when he was flicked on by Aswani but his shot on the volley went over. In the 73rd minute, skipper of the day Odhiambo came close as well when his header off a Titus Achesa cross went inches over the bar.

Three minutes later on the break, AFC made it 2-1. The defense failed to clear the ball and Okaka pounced on it unmarked on the right shooting low past Aimo.

But the never say die attitude of the players showed as they chased the game with intensity and they were rewarded for it when Juma shot low into the net from the right, catching the AFC keeper unaware. Sofapaka should have had a penalty a minute later when an AFC defender handled the ball but the ref waved play on.

The team settled for the point, a step up having lost last weekend 2-1 against Bandari at the same venue. Focus now shifts to next weekend’s away trip to Nakuru for a game against Ulinzi Stars FC.