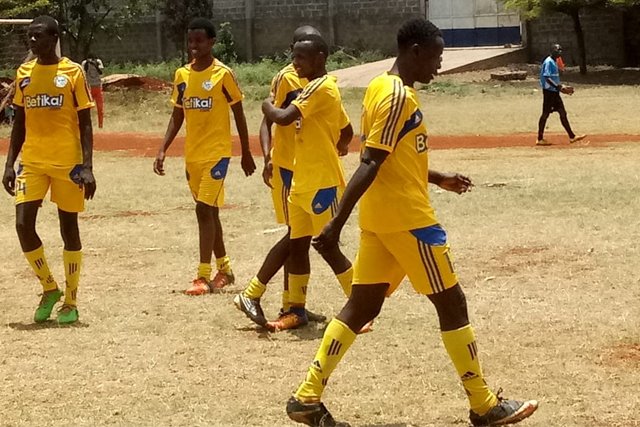 Njoroge, however, completed his hat-trick score at an hour mark after beating Jericho keeper with a low shot that went through the middle of the goal to the back of the net shortly before coach Edward Munandi made a decision to replace him with Juma Sudi,

For Sudi, needed only 12 minutes after being introduced to register his name on the score-sheet. The lanky forward unleashed a shot from inside the area in the 82nd minute that went straight to back of net to ensured that the Visitor’s strike — by Godfrey Omondi– be counted a consolation.

“It has not been an easy game. They (Jericho) were hard and played well but it good we utilized our changes well. However, i give credit to my midfield for supplying me with good passes and also to my coach who took us through sessions of making clever runs upfront during training which have yielded fruits today” Sofapaka’s hat-tricky scorer Joseph Njoroge said shortly after the game.

Njoroge performance could easily have been challenged for man of the match nevertheless the entire team was outstanding.

“The game has been good because my players have enjoyed. They have played well and utilized the chances created“, head coach Edward Munandi said after the game. His counterpart at Jericho Stars put the loss to his squad that saw most of his key players not turning up for the epic game.

The win took Sofapaka to within two points of the league crown and they will be declared champions if second placed Uprising fail to beat Black Mamba on Sunday as the season enters ints final round.

The league has three zones, where all the winners of each of the zones will earn automatic promotion to the regional league, while the runners-up will play in a mini-league where the winner would secure the fourth promotion slot.

In other fixtures, Umoja Rhinos and Tena United are scheduled to play Mbotela youth and Uefa Umoinner in that order at Tumaini primary school ground. All the above fixture are schemed to happen on Sunday.