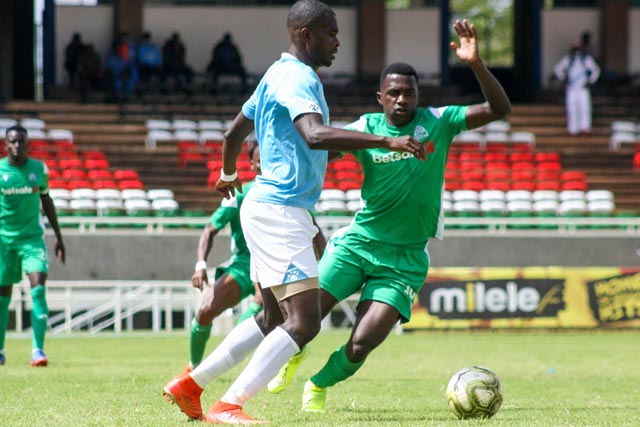 Host Gor Mahia kicked off proceedings on a high note pressing Sofapaka at their own half for an early opener. Jules Ulimwengu and Austin Ochieng combined well to score the opener but Kevin Omondi was well placed to clear out danger

At the quarter hour mark, Gor attacked once again a dangerous through ball to Omalla by Austin proved challenging but Omalla’s final ball but lacked power to roll out for goal kick

Six minutes later K’ogalo took the lead through Jules Ulimwengu, the striker chipped the ball past onrushing Kevin Omondi after being set through by Austin Ochieng

At half hour mark Sofapaka almost leveled scores through David Kingatua. The midfielder pounced on Lawrence Juma’s delivery but his hard shot rattled the crossbar much to relief of a handful K’ogalo faithfuls at the stadium.

Five minutes before the interval, BatotoBaMungu came close yet again a quick counter attack on the left flank by Kingatua and Wilberforce Lugogo, the latter delivered on a low cross that met Juma but the former Gor Mahia player volley missed the target by a whisker with keeper Adama well beaten

Upon resumption head coach ken Odhiambo made a triple change, Titus Achesa, Said Stuma and Alex Imbusia came on for Ronack Otieno,David Kingatua and Wilberforce Lugogo, the changes proved effective with the Sofapaka dictating most of the proceedings.

At the half hour mark of the encounter Sofapaka had another opportunity on goal substitute Hansel Ochieng beat Frank Odhiambo off the ball, dribbled through on goal but his final tough went straight to keeper Adam’s hands.

Five minutes later Roy Okal came close to level scores, a long ball by Alex Imbusia to Okal the midfielder’s header was cleared off the line by custodian Adama to keep Gor in the lead.

Against the run of play Sofapaka made the last change in the game, Roy Okal came off for Robert Ponda the youthful striker came close but his final attempt missed the target from close range as Gor Mahia held firmly to bag the maximum points