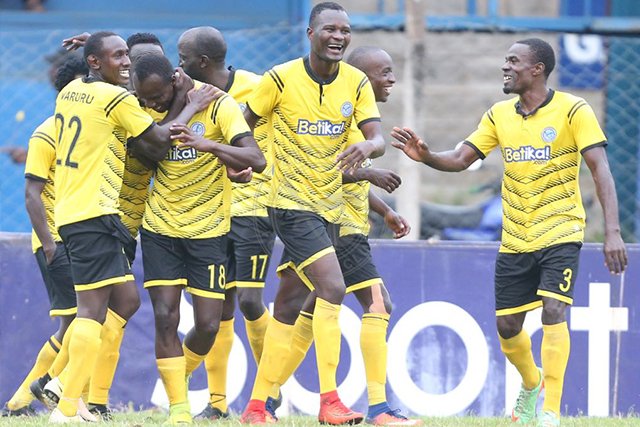 Reigning KPL champions Gor Mahia got a scare in what would have been their first defeat of the season by the number two champions KPL 2017. A last minute equalizer gave them a 3-3 draw with Sofapaka in Machakos on Sunday.

Meddie Kagere and Bernard Ondiek scored in the first half, but Sofapaka came back spirited in the second half with Kepha Aswani pulling one back while substitute Ezekiel Okare scored two in the final five minutes of the game.

It so happened that Batoto ba Mungu were staring at victory infront of their own eyes, but in the last minute, a poor defense saw Wafula slam the ball home from close range.

Gor started the tie faster off the blocks. In the first minute, Ephraim scored from a Wafula cross but the goal was cancelled for offside.

Sofapaka had a brilliant opportunity to get back into the game when Umaru Kasumba broke off to face Boniface Oluoch one on one after picking up the ball from a defensive mistake. However, the Ugandan curled the ball wide from the edge of the box.

Oluoch made a brilliant save on the quarter hour mark one on one from Kevin Kimani after the winger was picked out with a cross from Elli Asieche.

Having survived the scare, Gor sought more goals and they had just that in the 24th minute when Yusuf Mohammed’s headed clearance fell graciously on Ondiek who nodded the ball beyond Mathias Kigonya.

Waruru almost turned provider in the 33rd minute when his cross found Kimani at the edge of the box but the latter’s shot was over.

On the second half, Sofapaka came back with intent and pushed from the first whistle. They were rewarded just six minutes later when Aswani struck from his left foot beyond Oluoch after being picked out by a Kimani through pass.

Sofapaka continued their upward trajectory and they came inches close on the hour mark when Waruru tried to chip the ball over Oluoch who was advanced off his line from a counter attack but the ball went over.

On the other end, Gor had a chance to stretch their lead but keeper Kigonya made two brilliant saves. First, he denied Kagere one on one after the striker had raced to a through pass while his second was a reflex, leaping to his left to parry away a diving header from Guikan off a Wesley Onguso cross.

But Sofapaka kept on fighting and were rewarded five minutes to full time when Okare scored the first of his two, heading the ball beyond Oluoch who was off his line. Four minutes later, he scored what looked like a winner when he slammed the ball past Oluoch after Kimani won the ball against Shakava to feed him.

But, the joy was shortlived with Wafula scoring on the other end after a goal mouth melee that resulted from a corner.

Gor Mahia are now looking to maintain their unbeaten record of 13 Kenyan Premier League matches, a feat that will be put under test when they face arch-rivals AFC Leopards in the Mashemeji derby next weekend at Bukhungu Stadium