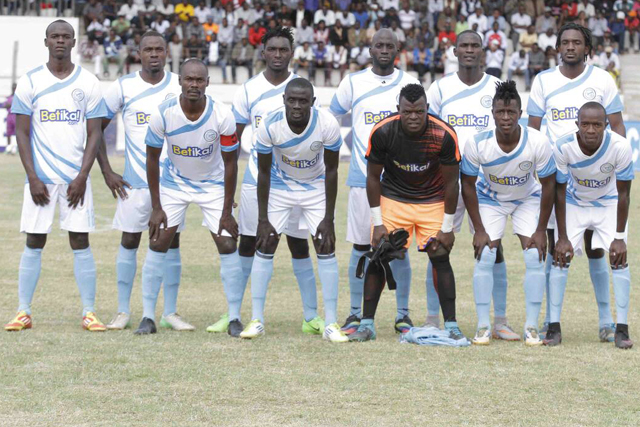 Despite trailing 2017 Kenyan Premier League table-toppers Gor Mahia by nine points, Sofapaka have the bragging rights of having plundered the highest number of goals in the season.
The goal-hungry Batoto Ba Mungu have 38 strikes to their name with K’ogalo coming a close second with 36 strikes thus far.
Yesterday, Sofapaka Technical Director Martin Ndagano said it’s encouraging to note that the team’s strikers have an eye for goal and can only get better before the league comes to a conclusion.
Ndagano added that the idea of the Sofapaka management to ring changes in the playing unit and especially the striking line was ultimately the antidote the team needed to score goals.
‘’We went for strikers with a proven scoring record and hopefully, Sofapaka fans should expect more goals from them as the league progresses,’’ said Ndagano.
The official singled out red-hot striker Umaru Kasumba and Ezekiel Okare, who have scored nine and seven goals respectively, as players whose work-rate is excellent, adding that both have the potential of bagging the Golden Boot Award at the end of the season.
Ndagano said there is no respite in the marksmanship and has declared that his charges are ready for a goal-fest during this Saturday’s match against Kakamega Homeboyz in Mumias Complex and the midweek fixture next Wednesday against Gor Mahia.
Commenting on the two upcoming matches, Ndagano said Batoto Ba Mungu have not pressed the panic button despite the fact that both Homeboyz and Gor are some of the strongest teams in the league.
‘’We know the kind of opposition we are up against but I would be cheating you if I tell you that we are jittery. We are fighting for the league title and as such cannot afford to take things lightly,’’ said Ndagano.
Sofapaka were held to a goalless draw in the first KPL match to have been played at Camp Toyoyo ground in Jericho and it will be interesting to observe just what will be up their sleeves in the reverse fixture in Mumias that is reputed to be one of the most dreary hunting grounds in the country.
Homeboyz has always proved to be a gritty side when playing at Mumias Complex but then, pundits aver that the team is beatable by any opponent with proper planning.
The team’s strength mainly lies on twin strikers Keiphas Baraza and Andrew Murunga and these are the players Sofapaka will need to keep on a leash throughout the match.