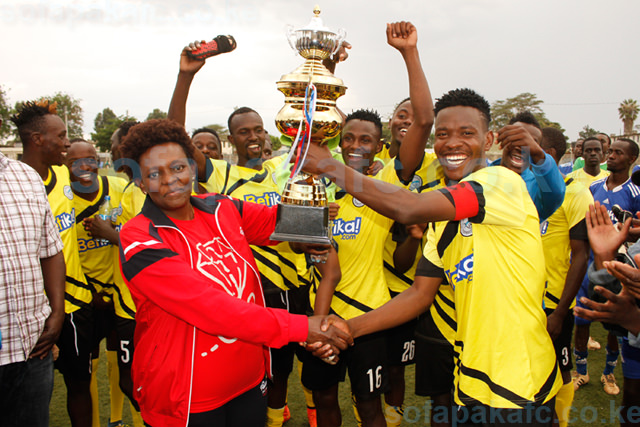 Sofapaka can now rest easy ahead of their Kenyan Premier League (KPL) match against Western Stima in Narok on Sunday after posting a morale-boosting 5-0 victory over Kangemi Allstars in a Mushujaa Day derby at Camp Toyoyo ground in Jericho on Friday.

Morven Otinya hit a brace while Hansel Ochieng, Timona Wanyonyi and Meshack Karani contributed the other goals as Sofapaka breezed easy in a one sided match even with two penalties wasted.

The match began in earnest with Sofapaka dictating the pace at midfield. Timothy Luda ran through the Kangemi rearguard in the second minute to tee up Otinya who excellently slot the ball inside the box for the opener. As the game wore on, Kangemi attempted to come into the game as Brian Ndeta and Kevin Oduor staved of a flurry of Sofapaka attacks.

Pressure mounted for the inexperienced Kangemi as Sofapaka bossed the midfield with Meshack Karani and Brian Magonya especially a handful to their opponents.

In the 27th minute, a defensive howler by left back Isaya Ochuka gave Hansel Ochieng an opportunity to poke in a goal for Sofapaka past the unsighted Kangemi goalkeeper Julius Okendo.

Sam Ssimbwa’s men started taking control of proceedings as the slum boys began fading off. In the 42nd minute, a loose ball off Simon Onyango fell at the feet of Otinya whose rasping 25 yard drive was too hot to handle for Okendo.

In the second half, Allstars made tactical switches bringing in Jason Chege and Chris Njenga who changed the game as they pressed high up. However strikers Allan Omondi and Samuel Otieno were lethargic with the experienced Sofapaka staying solid. Meshack Karani and Timonah Wanyonyi were to close shop with beautiful goals that beat substitute custodian Brian Otieno who earlier made good saves off Karani and Willis Ouma in the 67th and 71st minutes.

“I’m proud of my team because this is the first time we are playing against a top side. We have taken a lot of positives in this game going forward as we seek promotion to the NSL,” stated Machira whose side leads in the FKF division one league.

His opposite number, Sam Ssimbwa said the match is a motivation to his squad since this is the first cup this season.

“I am proud of my boys for displaying a good show today and winning this cup because we were bundled out of the GOTV shield cup tournament and the KPL league crown is already out of our reach. Today I have given a lot of my youngsters in the team a chance to play and they surprised me with the five goal win.” quipped Ssimbwa who squad is currently at second spot on the top-tier league.

Ministry of Sports representative Caroline Kariuki praised both teams for putting up a good show and bringing young people together during the Mashujaa Day.

“We normally hold this tournament every year to try and bring the youth together as a symbol of unity and also to enable the team playing in the lower division to brush shoulders with a top team from the top-tier league. Next time we will select another team to play a top KPL side as continuity,” said Kariuki.