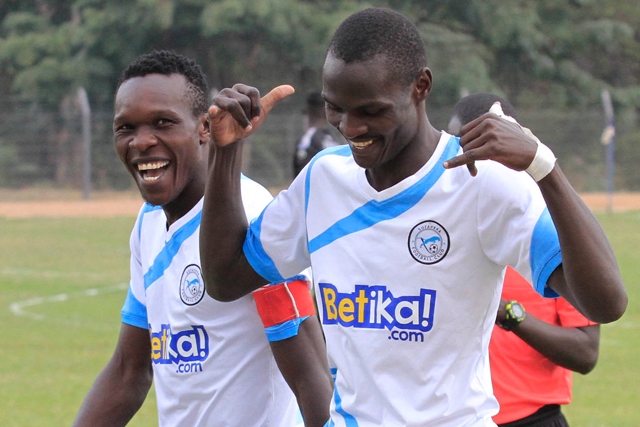 Sofapaka forward Umaru Kasumba is back in training and in contention for a place in the game against Tusker, this coming Saturday 11 November and he has assured the team of making up, as far as the race for the Golden Boot is concerned.

The striker missed the team’s last two matches, against Mathare United and Sony Sugar as he nursed a shoulder injury picked in training. While out, he fell behind in the top scorers’ race, currently trailing lead scorer Masoud Juma by four goals.

Glad to be back

He arrived back in Kenya and started training on Tuesday 7 November and as he works for his starting spot, he’s optimistic there will be no further setbacks in the final two matches of the season.

“Truth be told, like any other player, It was tough being out there; I want to be pitch always and so I am happy to be back. I have trained for two days now and I am feeling much better and ready to score more goals. I will continue working hard for the top scorer’s award because I believe I can still win it.

“If I don’t, I will at least finish among the top three but I want to be the best and I will work for that in the remaining two matches,” he added.

The striker, has so far scored 11 goals, joined the team in midseason. He should have added one but opted against taking a penalty against Bandari FC in the team’s 2 – 1 win over the Dockers but he says he has no regrets at the decision.

“We are a team and are all capable of taking penalties. Sometimes it is not all about Kasumba, but the team. Furthermore, we have a list of penalty takers and I have no regrets at all for not taking it,” he added.

Goalkeeper Mathias Kigonya scored from the penalty, earning them three points in the game.

While he sets individual goals, Kasumba is also seeking to help his team achieve the highest possible finish. The best the 2009 champions can get is a second placed finish and playing third placed Tusker in their next game will be crucial to this target.

Kasumba knows as much; “We have what it takes to beat a team like Tusker. I don’t mean Tusker are weak but this is a fight for second place and I know it is ours.”

Sofapaka have so far managed 49 points and are placed fourth on the log.