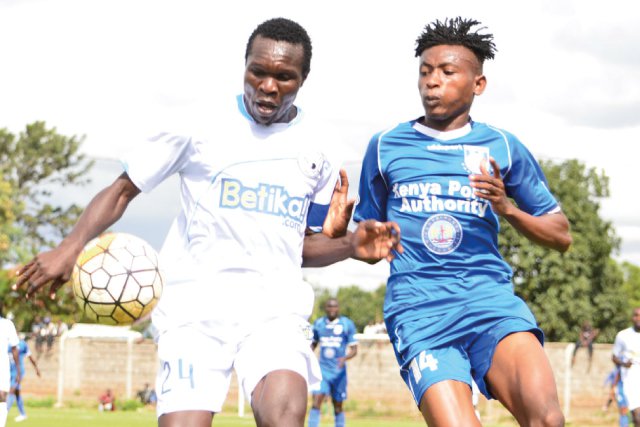 For Sofapaka, the die is cast as they open their 2018 Kenyan Premier League campaign against Bandari at Narok Stadium on Sunday.

For the whole of this week, Sofapaka who have arguably made the most remarkable signings this season have remained extremely bullish ahead of the new season with most players promising fire and brimstone.

Fast-rising budding players Samson Pius and Patterson Odongo who were elevated to the senior team from the junior ranks are both looking forward to the top tier league.

“I can hardly wait to rub shoulders with the seasoned players in the team and if I will get a chance to be fielded by Head Coach Sam Ssimbwa in the opening match against Bandari, I will give my all to make the team fans happy.  It was really amazing to be promoted to the senior team and this is a chance to prove what is up my sleeves,” said Pius.

On his part, Odongo’s sign language and sentiments told it all, saying:” Being promoted to the senior team comes with several challenges an expectations but I believe I’m up to the task. I think we are the team to beat in the 2018 KPL,”

In the meantime, Sofapaka may have lost resourceful players in Ugandan striker Ali Feni and defender Jonathan Mugabi, but be it as it may, the clubs has signed players who are capable of sending jitters to Bandari and any other opponent they will face in subsequent league matches.

For instance, the signing of Kepha Aswani, Elly Asieche, Ibrahim Kitawi and Kevin Kimani is currently the talk in town amongst football fans and these are among the players who Sofapaka will be looking upon to help the team get the desired results.

Sofapaka coach Sam Ssimbwa has urged his charges to remain focused ahead of the Bandari game.

“If we can pick all the three points against Bandari, it will give us the inspiration going forward. Bandari is a strong team but that does not mean we are not capable of beating them, In any case, we will be playing at home and as such, this I an advantage we will utilize to the fullest,” said Ssimbwa.

Sofapaka skipper Hillary Echesa said he is determined to help Sofapaka clinch the KPL title before hanging his boots later this year.

“The resolve and confidence are there and I would wish to leave a legacy worth emulating. Winning the league with Sofapaka will by my biggest achievement as I say Adios Amigos to the beautiful game” said Echesa.

Echesa is the most experienced player at Sofapaka having previously featured for Tanzania’s Yanga and Simba, among other clubs outside Kenya.