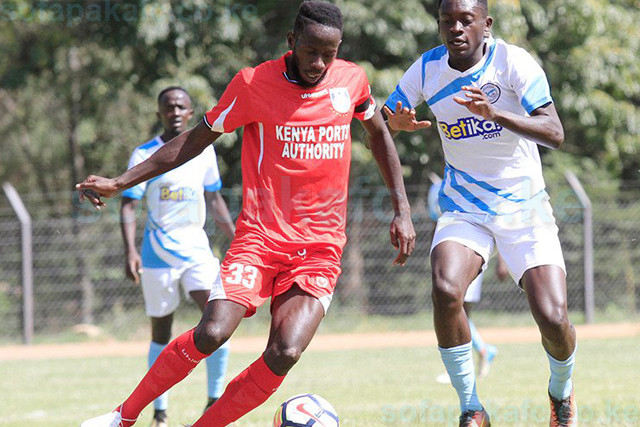 Bandari has started the 2018 KPL season on a zooming note after seeing off Sofapaka 3-0 in an entertaining match played on Sunday 4th February at the Narok Stadium.

The match started with a moment of silent following the passing on recently of Bandari Team Manager. The teams however made it an end to end affair soon after the kick off whistle in what was impressive football especially with Harambee Stars coach Paul Put in attendance.

Bandari however appeared to have gotten into the rhythm faster but their first free quick taken by Shaban Kenga heading straight into the four man wall. The visitors pushed the hosts back into their area with Waruru often doing some defensive work.

The former Ulinzi man would soon be penalized after a foul but their opponents continues to push; Aloro Rodgers standing firm and proving impressive in Sofapaka defence. Meja Nicholas also came close with his shot at the near post being cleared but it was not long before Anthony Wambani opened the scoring, connecting perfectly with a through ball from the midfield in the 15th minute.

Sofapaka did not sit back and attacked in response with Bandari keeper Shikhalo being forced off his line to punch away an Aloro Rodgers freekick from outside the box. Wambani was enjoying a field day and would soon return with more attacks capitalizing on the gaps left in the Sofa defence and grabbed his brace five minutes later; this time finding himself at the end of Kenga cross inside the box to tactfully shoot past a helpless Kigonya.

Felly Mulumba was at hand to rescue the dockers from an agile Waruru and clear the danger in the 30th minute. Unconvinced with the performance thus far, coach Ssimbwa made an early double substitution introducing Aswani and Oduor for Asieche and Osok who appeared to be losing too many balls. Aloro had his freekick saved towards the end of the first half with Shikalo showing a mix of confidence and experience but the visitors continued to dominate the match; fans not being left behind in cheering the action. King’atua and Kimani had final attempts on goal to the end of the first half but with no results.

There was no reprieve for Sofapaka in the second half as the visitors remained on the offensive and soon they added the third through David King’atua; the ‘prodigal son’ and lanky attacker reacting fast on a rebound from Kigonya to release a short straight to the back of the net. This followed two failed header attempts from Aswani.

As Sofapaka attempted a comeback in the 60th mark, Shikalo would become a darling of the fans making three impressive saves with amazing reflexes first rising to grab goal bound high ball before diving to stop Umaru Kasumba’s well timed header. He then stopped a one on one attempt from substitute Kepha Aswani from inside the box.

Bandari threw in fleet-footed Joshua Oyoo for Hassan in an attempt to mantain pressure agianst a re-energized Sofapaka and this seemed to have worked as Yusuf Mohammed came to Sofa’s rescue from Oyoo’s looped ball clearing just inches off the line.

Yusuf Mohammed and Kepha Aswani were impressive in the final minutes in search of a consolation goal for Sofapaka but it was a clear heartbreak for Batoto Ba Mungu in the season opener.