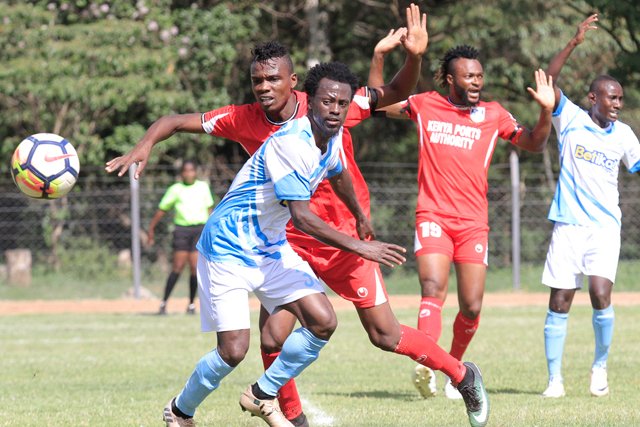 Bandari fc has extended its unbeaten record of a dozen games by securing a one all goal as they hosted Sofapaka at Mbaraki Stadium.

Kepha Aswani opened the goals on the first half for Sofapaka and then William Wadri equalized for the hosts on the second half.

The game was a rescheduled fixture after heavy torrential rains made the pitch unplayable as the fixture was originally slated on Wednesday 26th September. Come Thursday , the pitch was still waterlogged but that didn’t dampen Sofapaka’s spirits as they broke the deadlock in the 10th minute through Kepha Aswani.

Sofapaka were brimming with confidence after their Shield victory over holders AFC Leopards in the weekend enjoyed dominance in possession and the pitch once again played a part in the tie as Faruk Shikalo was handed a red card for a lounge on Waruru after punching the ball. Sofapaka went into the halftime break leading 1-0.

Bandari resumed the second half a much-rejuvenated side and pulled level five minutes after the break through Wadri who notched his ninth goal of the season. Abdalla Hassan played Wadri through on goal as the Ugandan international got past the defenders to burry home the equalizer.

Bandari continued to press on for the winner as the game entered its closing stages and came agonizingly close when Dan Guya’s effort was cleared off the line by Kevin Kimani as Bandari players made claims that the ball had crossed the line. Sofapaka, however, held on for the draw as they move to fourth on the log while Bandari maintains their second spot on the table.